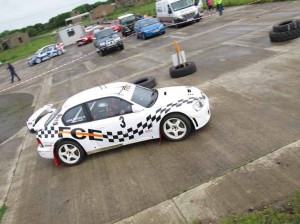 John Rintoul in the Hyundai

It’s been nearly five years since John Rintoul last won a rally. And that was at Crail, in November, in the cold, in the wet, in the mist and in the Lancer. This time the sun was shining and he scored six fastest times out of 7 stages to put himself back on top of the podium. “I was able to relax on the final stage,” he said afterwards, “it’s just a pleasure to drive this car.” Sitting alongside in the Hyundai WRC was Ross Hynd who was even more delighted: “This is my first victory in six years of co-driving.”

Equally secure in second place were Alistair and Gillian ‘George’ Inglis but they were lucky. With the Lancer rarely pointing in the direction of travel, Alistair flung the Lancer round the final stage, slower than his previous run, but in a much more spectacular fashion. It may not have been as fast, but it was fun.

In fact, the best battle of the day was for third place, and this was finally resolved in favour of Gary and Gordon Adam who finished third and top 2WD car in their Escort MkII.

Over the first two stages, the white Hyundai opened up a gap of 20 seconds on the white Lancer with John Paterson in his MkII within striking distance of Inglis and just 3 seconds clear of Tom Morris who was giving the Metro 6R4 a run out ahead of the Machrihanish event.

Ross Fernie in the Subaru was only 9 seconds behind Paterson while the sixth fastest man over the opening two tests looked every bit as surprised as the rest of us. It was David Ross, first time on tarmac, with the ex-Andy Horne DAM GTi. He looked as pleased as a five year old discovering his parents’ hiding place for the Christmas presents.

Nigel Feeney was already putting his Subaru on the trailer. Russell Fair was not feeling well and after a near miss at the merge, with front end battle scars to show for it, Nigel put the car on the trailer: “There’s no mechanical damage, just cosmetic, but I don’t want to risk it if Russell’s not up to it.”

Dom Buckley nearly followed suit. “I came to the end of the long runway section – no brakes.” he lost over a minute on the first two stages but got some pedal power back during the gap before 3 and 4, although he had dropped a minute to the leaders by this time. Ian Forgan had heat problems too. On the first stage, the electrical connection on the cooling fan broke and the Ka dumped all its water, so he backed off. He tackled SS2 a bit more tentatively too just to ensure the engine hadn’t been damaged and then decided to go for a finish, rather than a result.

The fourth stage was yellow-flagged when smoke was spotted on the far side of the airfield. Scott Grant and Derek Forsyth noticed smoke coming through the gear lever gaiter on the Lancer and when they pulled over to investigate, flames started licking out from under the bonnet. The fire was put out but the wiring was a mess although Scott reckons they caught it in time before it damaged the engine. So it looked a lot worse than it actually was.

Due to the delay and the fact that so few had started the stage, the organisers cancelled it, so results after SS3 determined positions at the lunch halt, but there were now a few more gaps! 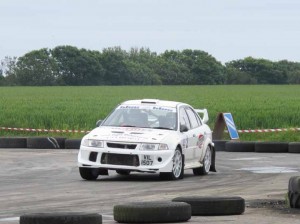 Rintoul still led from Inglis and Paterson, but Morris and Fernie were closing the gap on the third place man – only they didn’t. On the fourth test, first gear in the Metro shattered and the car clunked out of Stage 4. Then it was Fernie’s turn, the gearstick refusing to communicate with the gearbox and the Subaru limped out of the test bound for home. That immediately pitched Ross into fourth place and with Gary Adam now fifth, he was within sight of the podium. I think that was when he reached for the Weetabix with a Red Bull chaser!

Inglis was out of the starting blocks quickest on Stage 5 but order was restored on SS6 with Rintoul back at the top of the time sheets, but Paterson was feeling the pace. At lunch time he revealed he was wearing a biker’s kevlar protection under his suit. “I came off my bike three weeks ago and broke two rids,” he grimaced, “it still hurts a bit, but only when I sneeze or laugh.” Cue for lots of jokes from sympathetic supporters.

Adam took 3 seconds out of Ross on SS5 and equalled the Metro on SS6, but it was enough for him to grab third place by 3 seconds as Paterson just couldn’t quite match the pace, for obvious reasons, and dropped to fifth. And as the sun got brighter and temperatures got hotter, so the big Escorts were struggling to keep rubber on their rims. When Adam returned after his fifth stage run, the tyres were too hot to touch. Really.

Perhaps that’s what gave Ross Marshall a chance. The 1600cc power unit may lack the grunt of the big Millingtons, but it did mean he wasn’t spinning up the tyres, and perhaps that helped him put down what power he had more effectively on the road. As for his Dad, John was out on this sixth test when a throttle sensor failed on his MkII.

Dom Buckley had brake trouble again on 5 and 6: “It’s just a GrpN car with GrpN brakes,” said Dom Jnr Jnr, “I really can’t expect much more than that here, in this heat.” At this rate he wasn’t going to make the top ten at all.

On the 7th test, David Ross snatched a second back from Gary Adam leaving the gap at 2 seconds with one stage to go. Gary was well up for it, looking like a barefoot boxer jogging on sharp pebbles, before climbing back into the car. Running with number 46 on the door, the Metro was behind the Escort in the queue, so the MkII erupted first from the startline like a November the fifth rocket, smoke already trailing from the spinning back wheels.

A little less explosive but matching traction with grip was the Metro. The V6 wail cutting across the flat airfield like a lost Red Arrow, then it faltered. The wail reduced to a rumble, and the car pulled off the stage just five corners in. Silence. A rear tyre had deflated. “I don’t know what happened, I didn’t hit anything, I just felt the tyre go down on the right handers,” said a somewhat dejected David as he trudged back to the service for the trolley jack and spare. One consolation, he was pleased with his times and his performance. 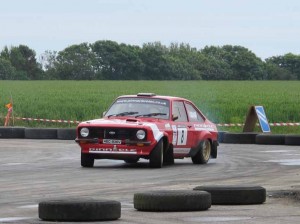 That left Adam secure in third place with Paterson hanging on to fourth. Colin Gemmell had recovered from a marker tyre rumble on the fifth test and over 6 and 7 had cut back the deficit between himself and young Marshall. on the final stage he only managed to take a second back. It wasn’t enough and he finished sixth.

Lee Hastings finished seventh after a very trying day in the Subaru, despite setting third fastest time on the opening stage: “There’s a problem with the ECU,” he said, “when I pull on the handbrake it cuts the engine and it tries to stall, so I’m having to adapt my driving and not use the handbrake.” That proved easier to say than to practice as his natural reaction at the tighter bends was to go for the handbrake!

Peter Gibson finished eighth in the Lancer on his first visit to Crail and thoroughly enjoyed the stages and the venue while Stuart Walker was ninth after a calm day (by his standards) although the flanks of the Lancer showed contact with tyre markers. Ian Paterson rounded off the top ten in his Subaru despite a puncture on the first stage and burst rear brake pipe on the third. Then on the last stage he swiped a super single which “applied some new graphics down my side of the car,” he added.

The winner wasn’t without his troubles though: “The gearshift air pump failed on the start line of the first stage, so I had to change gear physically. There’s just a wee stump of a gear lever so it took a bit of getting used to, and I used the clutch all the time just to save the ‘box. Not a problem though, it was just a good day out.”

A thought echoed by all who left with a sun tan rather than wind burn.