You are here: Home » Rally News » 27 May: Biggles for Jim Clark Rally? 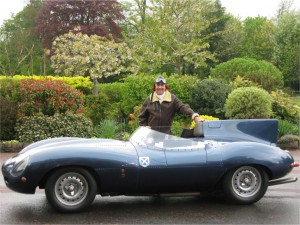 No, it’s not Biggles, that dashing hero of schoolboy fiction, it’s double British Touring Car Champion, John Cleland. The Galashiels/Melrose based Jaguar and Volvo dealer will drive his lovingly built Jaguar D Type at the head of the field on this weekend’s Jim Clark Rally – but only on the first stage!

As part of the weekend long sporting festival, the organisers have arranged that a procession of historic and iconic cars will run ahead of the rally cars through the Duns town centre stage on Friday evening.

With the public road due to be closed officially at 5.00 pm and the first rally car not due until 7.00 pm the closure provides an ideal opportunity to revel in the sights and sounds of a nostalgic by-gone era.

John Cleland will lead the parade in his D Type Jaguar followed by Nick Rossi (from Hexham) in his C Type Jaguar. Representing Knockhill Race Circuit, race and rally driving instructor Bob Watson will drive one of the circuit’s ‘E Type Experience’ cars, a 1967 series 1 Jaguar E Type. This is an ideal age-match for Bob as he is a former Scottish Rally Champion winning the title way back in 1971!

The lead cars will be followed by a V12 Jaguar E Type and bringing the marque up to date will be a current model F Type, the spiritual successor to the E Type.

Adding a touch more motoring history and mechanical glamour will be a representative display by members of the Vintage & Veteran Sports Car Clubs whose members will be driving a variety of historic cars. These will include a 1919 Lagonda, 1926 Bentley, 1930 Lea Francis and Twin Cam Sunbeam, a couple of 1935 Austin 7s, including a supercharged version, a 1936 Frazer Nash replica and a 1976 Ecosse Hillman Imp and more to follow.

In other words a real motoring treat ahead of the furious flurry of rally car action that will get the 2014 Jim Clark Rally underway in Duns on Friday evening, with a full day of rally action planned for both Saturday and Sunday.