Rallying and racing royalty were at Ingliston last weekend. Twice Scottish Rally Champion Charles Samson (1975 and 1977) popped into Ingliston for a nosey along with former Scottish Saloon Car Racing Champion Graham Birrell who actually competed at Ingliston when it was a motor racing circuit. Mind you that was way back in the 1960s and 70s. Graham was amazed at how much of the old track and the layout he recognised when he first raced an Austin A40 there, then a Hillman Imp, then single seaters, although he was best known for his exploits in the Wylies of Glasgow Ford Escort TC. After that he went on to race sports cars in Europe, but what a blast seeing him there after all these years. And although Ingliston is a non-spectator event, the organisers couldn’t really stop Charles popping in – he’s got his own key! Well, figuratively speaking. Charles is a shareholder in the RHAS (Royal Highland Agricultural Society) who own the showground and he and Graham had been invited along by another old-timer Bruce Lyle.

Kieran O’Kane was entered for the DCC Stages, but didn’t make it. His new car wasn’t quite ready and he wasn’t going to rush it. He had taken it to Andrew Gallacher’s place the night before the rally to get the V6 mapped, but the engine and drivetrain frustrated all their efforts to get it sorted. So Kieran withdrew his new Ascona from the entry list to make way for someone on the reserve list. It’s a great pity, the car looks a treat sitting there on its Group 4 Escort running gear. 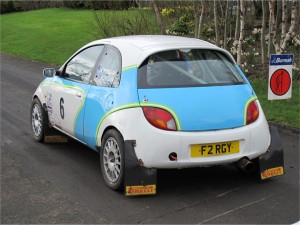 Well, what do you think?

The Forgan family turned up in the Mercury Classic Cars Ford Ka resplendent in its new paint job, but I’m afraid I was the tiniest wee bit rude about the design. Ian then took it upon himself to explain the concept to me. The white car now has some blue and green embellishments which Ian said was actually Olympic Blue and Le Mans Green, so that was me told. Then he explained the ‘design’. “The curved and sweeping blue shape along the sides make it look quite sexy and that represents Kathryn, while the ‘Y’ shaped finish at the rear is more Y-fronts shaped, and that’s me,” said Ian. Ah, thought I, so that’s why it’s got some brown stains around the exhaust. But it was only a little bit of rust.

Nick Runcie’s appearance at Ingliston in the Saxo was a one-off, or so he says: “I’m going to Knockhill tomorrow to race in the BMW Compact saloons one-make series. Both me and my son Zack have got a car and we’re going to do the season.” Nick actually started circuit racing before turning to rallying. He raced 2CVs for three seasons including four 24 Hour races. “Ingliston is a one-off but I might pick and choose a few more events,” said Nick, “I’ve got a bit of a list. I’ve spectated on Mull but never done it so I might have a go at that and I’ve never done an event on Epynt.” I don’t know how he fits it all in, because on top of his racing and rallying machinery he coaches tow football teams. I thought it was only women who were multi-taskers! By the way, I checked out the results after the Knockhill meeting – neither of them won a race.

Murray Coulthard arrived at Ingliston after a 39 hour shift getting the car ready. It has been completely rebuilt since last season but underneath the Nova bonnet is a Suzuki 1300 twin cam and a 5 speed dog box. He nearly didn’t make the start of the rally (see Class roundup) when the clutch cable pulled out, but a certain veteran journalist saved the day! Said journalist grabbed his bicycle and sped off at huge velocity, legs ablur to tell the service crew and get their tools. Only to find they were up at the fence spectating and looking for Murray. Anyway our hero whistled and shouted and eventually they came running. Thank goodness, the poor soul was knackered after his Tour de France style display of two wheeled tenacity, speed and dexterity.

I had a bit of a chuckle at young Steven Hay’s recent exploits. He had been invited down to the new Driftland racetrack at Lochgelly to have a look and see what the boys were up to. He turned up in his ’04 plate 1.4 Fiesta amongst all these popping and banging, tyre-smokers and was quite impressed. Knowing that he was involved in rallying he was asked if he wanted to drive round the track so he said he would. Off he toddled round in the Fiesta with all these petrolheads smirking and commenting that he was very slow. “That was just a sighting run,” he said, “can I have a go now?” The result? Fourth fastest time out of nearly 30 show and go cars. In his wee 10 year old road car. Ya beezer.

I had to laugh, although it wasn’t quite so funny for Allan Paterson. He was co-driving for brother Stuart in the Subaru. On the first stage they went over the yump so fast and landed so hard that Allan was left: “My mouth was working, but nothing was coming out.” Not being a regular co-driver he had forgotten the golden rule – a final yank on the belts to make sure they are tight as you approach the stage start line. When his voice did come back it was just a tad more high pitched than usual.

I sometimes think we take the lover of our cars too seriously at times. Gordon Adam had noticed a weep of oil underneath the Escort at service and went digging about in the engine bay to look for it. It was nothing serious but he did scrape his hand quite badly on some wee straggly bits of wire braiding and was trying to mop up the blood with some tissue, or oily rag. Anyway, when Gary saw this he offered up his concern: “Don’t drip blood in the car!”

Barry Renwick appeared in his glorious MkII again, but this time with a new engine. “I got it on Tuesday,” said Barry, “so I’m still being careful with it. It’s a Phase 2 Millington and it has a few more bhp than the old one. This is not really the place to try it out, it’s quite a handful,” he smiled, “I found that out in the wet this morning.”

Ross McSkimming appeared at Ingliston in his new weapon, the ex Arron McClure Ford Fiesta ST. The Nova has gone and this was his first run out in the new machine so a steady fact finding run was called for – especially since faither was keeping a beady eye on the investment! Anyway, he enjoyed it: “It’s got more torque than the Vauxhall,” he said, “and it’s not so chuckable. It feels very stable.” He finished 37th first time out and was quite pleased with that.

Ross Carbry didn’t have to look far for trouble last week. His new cylinder head blew up on the Wednesday night before the rally and the standard head was re-fitted by Thursday morning. Then on the rally the gearbox started playing up and he tie-wrapped the plungers in place and finished the rally with the engine ratchet strapped in place having broken two engine mounts. He finished 61st.

Michael Farmer had the fanbelt knocked off the Focus when he got a cone wedged underneath the car and he didn’t have a spare – but Dingbro delivered one to the circuit at no extra charge. Nice one boys.

Alex Adams finished 48th first time out in his new MkII – the one with the garish pink wheels – which was quite an achievement as this was his first run out in a ‘proper’ rally car after his Junior 1000 Micra, and he’s still only 17. In fact it was a rush to get his licence sorted out so he could do Ingliston. He bought the car in Wales with a 2 litre Pinto and Tran-X box, but it was still quick enough for him to dent the front panel on the fourth stage. He looked completely unfazed with the switch from no-power FWD to a serious bit of poke and rear wheel drive. And who knows, he might have done much better had big Sean not flaked out in his road car between runs. He must have been on night duty the night before.

We all love him really, but when the electrical junction box was reported to be ‘live’ and cracking by one of the Marshals, some bright spark suggested we needed a second opinion, and volunteered that Keith Cowan should be sent to investigate by sooking his finger then poking it inside the box. One of the Stewards (no less!) said, “Oh no you can’t do that, wait till I get a bottle of water in case he doesn’t have enough spit!” Laugh, I nearly filled my wellies.