I almost didn’t notice the Snowman Rally report in the 32 page sports section of one of Scotland’s leading Sunday newspapers. The total report ran to 20 words.

Mind you, it was easier to spot the 177 word ‘news’ item and photograph in the news section. This reminded everyone of the tragedy which happened exactly a year ago when a spectator was killed. As if anyone in the sport needed reminding.

But this just about sums up the ‘popular’ press attitude to our sport. Why bother with the competition and the passion, when bad news makes more headlines?

Last year’s tragedy was a stark reminder to us all of the dangers, and it is to their credit that car clubs across the country took note and exercised so much more care when preparing pre-event programmes and arranging for spectator enclosures at events.

And therein lies the problem. When it started over 100 years ago, nobody ever actually claimed that motor sport was a spectator sport. The sport originated purely for the dashing young (and not so young) motorists of the day to compete against each other or against the clock. The trouble was, the first crank of an internal combustion engine, was enough to attract the nosey and the interested, the mechanically bent and the rubberneckers, to see what all the fun was about. 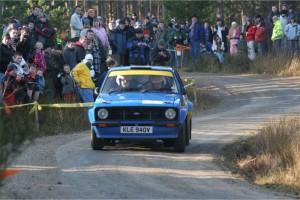 In the same way, no-one actually claimed that rallying was a spectator sport, it just happened. Spectators will happily trek miles into the woods and stand out in all weathers just to watch cars on their limit and envy those taking part.

Numbers have fluctuated over the years, but some events are now attracting big crowds. This is creating additional pressures on already overworked organisers to try and cater for them. I do know that many events have struggled to find suitable places for safe spectating and car parking and this has resulted in reduced access to some events. But that’s the price we have to pay.

The big problem is coping with those who know little about the sport. We have to educate them, inform them and guide them, but clubs with limited resources are struggling to cope with the numbers. Too big a turnout can swamp facilities and this makes some folk go off on their own.

It’s bad enough dealing with the hardened rally enthusiast who thinks he or she has the right to roam wherever they like. Most of them are sensible, but it’s the idiots who cause the problems. Inexperienced spectators will see the rally jacket and woolly hat and presume that the wearer knows what he or she is doing. Not all the time.

Rallying is one of the last great free sporting shows in the country. We can’t charge for access to the forests without bringing down the suffocating weight of rules and regulations regarding Duty of Care and Health and Safety. All we can charge for is car parks, and then hopefully guide the spectators to safe vantage points.

On the Snowman Rally there were a few extra interested bystanders – from the Forestry Commission. Over the past six months the FC’s H&S Advisor for Scotland, England and Wales, who actually lives in Fort William, has been in regular contact with the Highland CC organising team and he actually approved their ‘spectator plan’. On the day of the rally, he was out in one of the Course Cars while an FC employee was at each of the Spectator areas.

Fortunately, this senior FC chap was helpful and supportive, rather than obstructive, but he intends to visit more rallies across the UK in preparation for a report he will submit to the senior hierarchy. This report will be used by the FC in their future plans. It’s not that rallying is being singled out, the FC looks at all of their activities on an ongoing basis, but rallying is perhaps the most spectacular sport which takes place in the woods. Closer inspection is therefore inevitable.

We all need to be aware of this, and we all need to assume responsibility, not just for our own actions but for those others around us.

If we can’t cater for, and control spectators, then the Forestry gates will be locked, with rallying on the outside.