All the trophy and award winners in this year’s ARR Craib Scottish Rally Championship are listed below, but in amongst the silverware were some serious prizes. For instance, Calum Atkinson has won himself the Royal Aero Group Champions Test in an S2000 MG rally car with tuition from Mark Higgins (apparently he’s quite handy at this game!) at Forest Experience in Wales and also a trip to Sweden for some ice driving courtesy of Vital Equipment. So that’s at least two post cards he’ll need to send to his Maw this coming year! 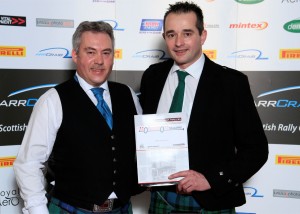 Mark McCulloch got himself a full set of shiny new alloy wheels while Iain Haining surely got the best prize of the night – a brand new Brian James Trailer from Morrison Trailers. For someone who has never actually owned his own trailer and had to depend on the friends and favours, this surely is the most practical prize of all. The prize was presented by that helluva nice chap (and trailer seller) John Morrison, and it couldn’t have gone to a more worthy winner.

Now, at the end of this list, under the ‘And Finally’ bit there is news of two more ‘unofficial’ awards, one of which has already been presented at a team ‘nicht oot’ and one which might never be presented at all due to the entirely unique nature of the competition which took place throughout the year, within the Scottish Championship, but not officially sanctioned in any way.

However, I think it worthy of mention, so there – see below! 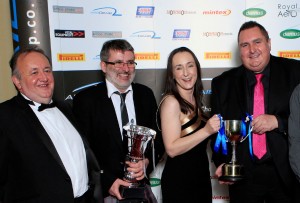 The Colin McRae If in doubt… flat out Award – Jock Armstrong

Pirelli A.B.C.D. (Above and Beyond the Call of Duty) Marshalls awards were also presented to –
Colin Christie, Andy Straube and Ian Douglas 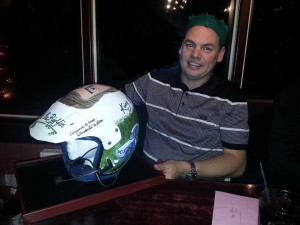 With ‘friends’ like Ross Cree, Andrew Davidson, Bernie Rooney and Charlie Shaw, Andrew Gallacher certainly doesn’t need to go looking for any enemies. But seriously, behind the scenes the boys were working on a wee surprise for Andrew and made the presentation at a ‘works’ night out. They had ‘borrowed’ Drew Gallacher’s original crash helmet which Andrew thought he had stashed away for posterity, and then surprised him on the night. In the meantime the boys had arranged for Allan Gibson to paint the helmet as a tribute to Andrew’s Dad, and what a job he’s done. The helmet will never see rally action again, but what a keepsake. 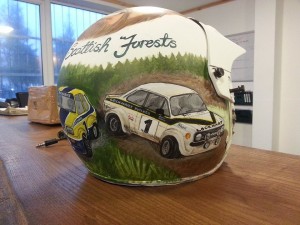 Big Drew was one of my original heroes too. In fact it was Drew who first gave the nickname ‘Jaggy Bunnet’ to a certain Scottish motor sports ‘journalist’, and that was way back in the early 1970s at the end of a Hackle Rally in Blairgowrie. And the name has stuck ever since – and by cracky that was some night, by the way!

Throughout the past 12 months of fierce, forestry fechtin’ I have recorded the progress of an altogether different challenge. Where others were concentrating intently on the dangers of ditches, the rigours of ruts, the toughness of trees and the doubtfulness of ‘flat’ crests, our two favourite ‘eedjits’ were entirely engrossed in their own game of ‘Horse’ whilst beating the living daylights out of a poor wee Peugeot 205.

The duo were also very inventive, allowing nothing to thwart their plans, including the fact that while contesting the Solway Coast there were no Horses to count on the Ranges – so they counted Tanks! On the final round of the Scottish Championship at the Galloping Hills, Keith counted 10 horses and Scott saw 9 thereby clinching the series title of 2013 Horse Counting Champion for Keith by a short head.

Editor’s Note … So impressed have I been with their dedication to this new sport that I will be suggesting that the Scottish Rally Championship officially adopts the new category as an additional ‘class’ in next year’s championship. It adds a whole new meaning to horsepower, eh?