Alex Vassallo and Neil Colman won a close fought Junior Rally at Kames in their Citroen C1 with William Creighton and Andrew Bushe second in their similar car. After 16 Stages around the Muirkirk complex, the winning margin was 17 seconds.

And so it went on, in fact the biggest gap between Vassallo and Creighton thereafter was 3 seconds on Stage 13 with Vassallo doing enough to clinch his fifth victory out of the six rounds of the 2013 Brick & Steel Junior 1000 Ecosse Challenge so far.

There was some luck in the Vassallo camp though, having survived a bit of a tank slapper through the Esses known as the ‘Chicken Run’: “It was cold this morning and I was on cold tyres and it was muddy,” said Vassallo, “it wasn’t flat – as it usually is!”

Michael Dickie just lost out on the runner up position by 10 seconds, but the Toyota Aygo driver continues to improve and held off rapid Irishman Ben Crealey in his Micra. Dylan O’Donnell was fifth and Drew Struthers scored his best result to date with sixth overall, ahead of Sandy Fairbairn and Alasdair Currie who had much work to do to the Citroen AX after its excursion through a fence on the Solway Coast event.

Missing from the top six this time was Harry Marchbank whose Micra broke a driveshaft on the start line of the first stage but he fought gamely on to finish 14th. 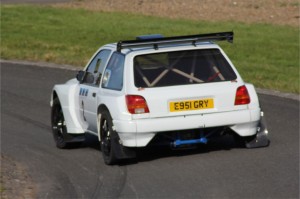 Robert Wright in his wide track Fiesta won the ‘Senior’ event by just over a minute from the Subaru of Billy Cowe who was hampered by a broken handbrake after the first four runs. Niall Thomson was third in his Citroen Saxo and Kevin MacIver fourth in his Escort MkII, but only after removing the grille and propping the bonnet open at the rear to try and stop the beast overheating.