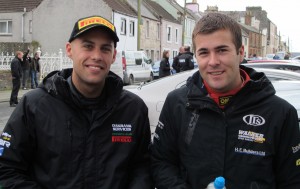 David and Euan – champions in waiting?

Duel for the Crown ….

The fight for this year’s top national motor sporting title may well be decided on the Colin McRae Forest Stages Rally in just over a week’s time on Saturday 5th October – or it may not!

Going into the penultimate round of the ARR Craib Scottish Rally Championship two young men face a unique personal duel in the forests. If David Bogie (from Dumfries) wins the rally outright, he’ll win the 2013 Scottish title – for a record-breaking fifth consecutive time. If Euan Thorburn (from Duns) wins, the fight will go on till the final round, the Armstrong Galloway Hills Rally on Sunday 27th October.

But this is rallying, and other factors can come into play, not least of which is the fact that first they must finish. Ahead of them on the day will be 44 miles of timed-to-the-second motoring over some of the most demanding forest roads in Britain.

There is another possibility, someone else may win, and take away valuable championship points. Last year’s winner for instance, Quintin Milne from Banchory. Unfortunately, Milne faces a race against time to be ready for the McRae Rally which he won for the first time last year. He had planned to drive a Ford Escort MkII in Perthshire, but at an event in Cumbria last weekend, the car was badly damaged following an “unintended altercation” with a bridge parapet on Warcop Ranges!

Those three may start as favourites, but after a torrid run of bad luck over recent months, Mike Faulkner (Aspatria) had huge a smile on his face at the end of last month’s Merrick Rally when he finished fifth overall. Not what he’s used to but the point was, it was his first relatively trouble free run this year which will set him up perfectly for the McRae.

Then of course there is the unpredictable Jock Armstrong (Castle Douglas), the fast improving Chris Collie (Aberdeen), and if he gets his car repaired in time after it’s Merrick accident, Barry Groundwater (Stonehaven). And making his return to the forests mid-season, the 2006 Scottish Champion, Dave Weston (Aberdeen) who finished fourth overall on last month’s Merrick and he too could upset the apple cart in Perthshire.

As ever, the Bears are working flat out (fuelled by Tunnocks tea cakes, caramel wafers and coconut snowballs) to be ready for this vital counter in the national series. The club will also have two of Colin’s competition cars on display at Rally HQ in Aberfeldy while the rally will also host the launch of a new McKlein book on the life and times of the 1995 World Champion.

The rally will start from the town centre of Aberfeldy at 7.30 am on Saturday morning 5th October, with the first car expected to return from 2.20 pm onwards.

A full Entry List, Timetable and Spect Info will be put up here when available.