You are here: Home » Rally News » 24 Sept: Kames this weekend 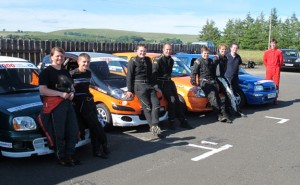 There will be some fun and games this weekend at Kames in Muirkirk on Sunday 29th with a big entry of Juniors plus a few ‘old hands’ to show them the way round – as if they need any showing. Billy Cowe has entered the main event primarily to see if he has solved the Subaru’s appetite for gearboxes and John McClory will debut a ‘new’ car.

According to Digby – “After a 7 week gap, the competitors in the 2013 Brick & Steel Junior 1000 Ecosse Callenge are “chewing at the bit” to get out in their cars at Kames Motorsport Complex on Sunday 29.

17 crews have entered the Junior Rally plus two of the 2013 registered Junior drivers who will be trying out their new machinery in the ‘senior rally’ now that they have reached the ripe old age of 17 and have graduated out of the Juniors.

Ryan Weston will be sampling his Fiesta ST and Alex Adams will be giving his MkII Escort an airing. And just to add to the excitement just outside the Junior brigade, John McClory – Championship sponsor – will be trying out his son Stephen’s new car ahead of the boy’s imminent graduation out of the Juniors. It is another Fiesta.

It is fair to say that Alex Vassallo in his Citroen C1 is having a better run in the 2013 J1000 Ecosse Challenge than he is in the F1000 J1000 Championship. He sits on top of the points table with four wins under his belt and is 11 points in front of Harry Marchbank in his Nissan Micra. There are still 93 points on the table but dropped scores will start to come into the equation after this next event.

Harry Marchbank has been very consistent all year, but Ben Crealey (Nissan Micra) has been scoring strongly and has already taken the hit of one dropped score. But Dylan O’Donnell (Nissan Micra) and Michael Dickie (Toyota Aygo) will be working hard to hold onto, and improve on, their 3rd and 5th places overall.

And from there on down to the 17th car in the rally it is anybody’s guess what the pecking order will be at the end of the day. Kames is a very difficult event to predict. It certainly favours the tidy and fearless drivers. But one thing is for sure – they will all be giving it ‘some welly’ and trying to work their way up the Championship table.”

There is however a note of concern hanging over Kames these days and that concerns the catering arrangements. At the last event, all sorts of burgers festooned the Menu, plain, cheese, sauce, relish, with or without bacon, black pudding and other sundries, but no pies. However, as events transpired, it did turn out that the staff did have a small stock of pies secreted away, but these were only available on request. It makes one wonder what the world is coming to these days to think that Scottish menus have become so Americanised with burgers and fries, that they exclude our national dish. Methinks a campaign is in order!