The Hartwood Festival of Speed … 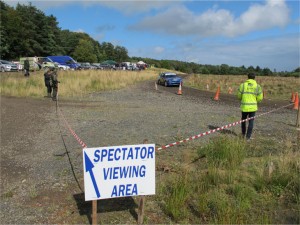 Coltness Car Club staged their first ever ‘Hartwood Festival of Speed’ at the weekend in Lanarkshire and with due deference to its rather more illustrious southern based namesake, they hosted a competition event headed by a star in a car, one Jim McRae Esq in his Ford Sierra Cosworth.

They also had a busy paddock and a spectator area set high on a banking overlooking the track, ideal for the picnic-ers, hingers-oan and glitterati. This was a proper event, and one worthy of repeating.

It was also rather unusual. The basis of the event was an ‘All-Forward Autotest’ where the CCC team had made full use of the MSA rules and regulations to permit youngsters of 14 and above to take part on an un-sealed surface, i.e. loose and slippery. 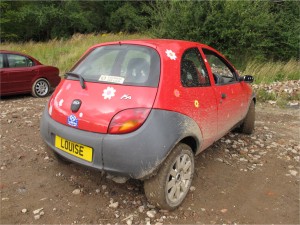 With rallying coursing through its heart and its heritage, the club have long organised ‘grass tests’ to encourage youngsters to take up some form of car sport and this latest event was a culmination of years of grass-testing events across the county. Having been refused permission to run at Kames for whatever reason, the club found an alternative venue almost at the last minute, and which turned out to be even better for the proposed event.

This was the site of a former hospital where the buildings had been demolished and the tarmac road surface removed leaving a network of loose surfaced roads behind. And this is where the ingenuity of the CCC scheme came to the fore. Even within the confines of a 200 metre by 200 metre maximum site size for an all-forward autotest, there was a maze of roads and ample opportunity to incorporate the required directional change every 50 metres plus scope for slaloms and all nature of bends. 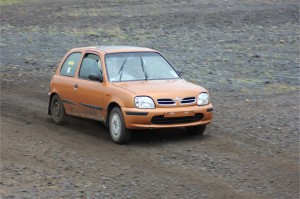 The result was a sort of kidney shaped ‘circuit’ with square corners, and slaloms in between, with various classes catering for all manner of bangers and grass trackers, road cars and rally cars. The nature of the terrain also allowed for easy changes to each test to ensure a variety of options during the day.

Only sealed surfaces can be used for AutoSOLO events, but for all-forward autotests, the choice of surface is free hence the attraction to the Bears. This event also allowed 14 year olds to take part, although they had to drive a production car (under 1400 cc) and carry a passenger. Naturally, cars had to be scrutineered and safety checked before the event, but there was no need for an MOT or tax – unless driven to the event. There were indeed some legal road going vehicles there, and all they needed was a jet-wash on the way home before being returned to the rental company the following day – only kidding!

A total of 36 drivers took part during the day, but the best of it was, some of the youngsters could share their car with older siblings and parents and gain from a bit of personal instruction/rivalry while the rest of the family cooked cub fodder and bear-food on barbecues. In other words, a proper family day out whilst teaching desperate-to-drive youngsters about car control, instead of them practicing hand brake turns in housing estates and shopping mall car parks when they should be in their beds! 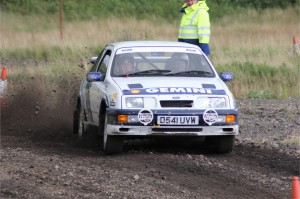 ‘The Boss’ put on a champion display.

Each test was run three times with the best score from each counting towards a final result and there were a few surprises in store. Jordan Black in his Peugeot 205 was only 4 seconds behind Walter Henderson in his Subaru at the finish, while Paul Cavanagh in his Micra beat Joe Pringle in his Corsa by one second. Even more satisfying was the fact that Paul beat the Ol’ Man in the same car by 8 seconds. There’ll be bragging rights at breakfast for weeks over that one.

And what did the organisers get out of it? More smiles per metre than any simple autotest could offer. That was reward enough, seeing the youngsters beaming from ear to ear at the end of each test, and they never got out of second gear. Magic, pure magic.

When it comes to entry-level, affordable motor sport, this is what it should be all about, providing future talent for Digby’s Junior 1000 and Peugeot Challenge. The venue proved to be ideal and hopes are high that more events can be run here.

Full marks to Shug and all the team for a grand day out.