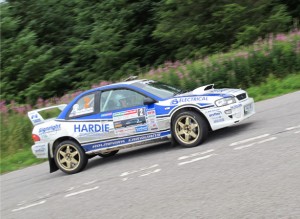 It’s been a while since Mark McCulloch scored his first outright rally victory, and that was on the Galloway Hills two years ago, but he made up for it at the weekend with a hard fought win on the usedcarparts.co.uk Solway Coast Rally. It also marked a rather special occasion for his 18 year old co-driver Elliott Edmondson who scored his first ever rally win.

Their winning margin of nearly 2 minutes might suggest that this was an easy victory. Not so. They worked hard early on and reaped the benefit later, on an event which was both competitive and dramatic.

David Hardie and John McCulloch set the pace over the first two stages, 6 seconds and 2 seconds quicker than the boys, but Mark and Elliott went 3 seconds faster in the third. On the fourth test, the Hardie Subaru: “Had a wee overshoot. It was just over a crest into a R9, and it was grerady from an early rain shower,” said David, ”and we dropped 15 seconds to Mark.”

That put Mark into the rally lead by 10 seconds, but It all went ‘tuts ip’ in the fifth test for David and John. “It just stepped out on a bit of loose gravel on a R2,” said David, “then it went the other way and hit a banking which launched it back across the road and into the trees.” It looked a lot worse than it actually was and both crew members stepped out shaken and stirred as they say.

“It gave me quite a scare,” said Mark McCulloch, “I was first car on the scene, and my Dad co-drives for David, but when I saw them both out the car I was very relieved.” Thereafter the McCulloch/Edmondson combo were left in control. “I did ease the pace a bit,” said Mark, “but I was still quite surprised that my times were so good.”

In second place were Ian Paterson and Jim Haugh, and a bit surprised to be there having slid off the road and down an embankment on the second test. If it hadn’t been for four wheel drive, they might well have stayed there, but lost less than half a minute driving out.

Jim Sharp and Amy MacKinnon were pleased with third place and their pace in the Mitsubishi. “That was the best run in the Lancer yet,” said Jim, “I think we’ve sorted out the fuel pump problems we had and we also found it had a bit of a flat spot when we were re-tuning it. We also got two punctures having to ditch-hook it to slow it down!”

Richard Dickson took fourth and Stuart Baillie did what he had to do taking maximum points in the BLUE Scottish Tarmack Championship with fifth place and the two of them finished the rally just 8 seconds apart.

Steve Retchless rounded off the top six in his Escort MkII and might well have done better, but for a wrong tyre choice: “We had an overshoot on the first stage, and then put harder tyres on for 3 and 4 – and then it rained!”

Richard Stewart had a good run into seventh place just 5 seconds clear of Duncan Wardrop while Ian Forgan might have done better than ninth: “We went off in the last stage,” he admitted, “we’ve broken a driveshaft and bent the rear beam.” That was probably down to trying just a shade too hard as he had a problem on the previous stage: “The plug came off the relay for the radiator fan and it overheated,” said Ian , “but we had been struggling with a wee problem all day, a flat spot between 3000 and 4000 rpm. Nothing serious but I had to drive around that.”
Rounding off the top ten was the Class 2 winning Corsa of Scott Russell: “Used the same set of tyres all day, they’re two years old now,” said the expert budget rallyist, “the only problem we had was on the first stage when a rear hub came slack, but all we did was tighten up the bolts.”

Drew Struthers just missed out on the top ten by 13 seconds in his Sunbeam and managed to hold off Angus Lawrie by 14 seconds, celebrating his glorious achievement enthusiastically in the Bar later that evening.

As for Lawrie, that was only his third ever rally, and he took the Class 1 award as well in his Nova.

Elsewhere, it was an eventful day for many crews. Lee Hastings was off in the second test, but the Subaru hit a rock on the 7th test which further damaged the suspension and broke the steering. Stuart Walker’s clutch failed on the first stage: “I finished the stage and limped round SS2 thinking we could change it quickly at service,” said Stuart, “but when we opened it up, it fell out in bits!”

Billy McClelland’s timing belt snapped and Stuart Paterson was another to inadvertently park his car irretrievably in the trees: “We went off and damaged the brakes,” said Stuart, “got back on again, then went off – because we had no brakes, well off!”

Scott Russell took the 1600 class win with Ross Pringle second in his Corsa from the Escort of Craig Gibson third who might have finished higher had it not been for a wee ‘off’ on the first stage which cost them 2 minutes. Iain Wilson didn’t finish after an intimate encounter on the first stage when the earth didn’t move! The Nova hit a gatepost, and the Nova’s beam axle moved instead. However, he did note that both rear wheels are pointing outwards at exactly the same angle – almost as if he meant it. Scott Peacock crashed the Peugeot and with a wee kink in the roof, it looks like a new ‘shell job is needed. The David Benson Honda suffered a rather more violent failure when the engine detonated, puncturing a hole in the block and Neil Wallace broke the gearbox in his Sunbeam.

Ross McCallum and Graeme Meins suffered what looked like a fairly inoffensive ‘off’ on the first stage with the Maestro, but later on that morning, Graeme started to feel pain in his chest, and the organisers wisely decided to get him ambulanced out to Dumfries. He was not alone, Matt Reid was airlifted to Dumfries after he too complained of severe chest pain at the Lunch halt giving his driver Kieran O’Kane a serious scare. Both were discharged on Sunday.

Angus Lawrie won the 1400 class in his Nova from Stephen Hay in his Corsa, from the similar car of Dew Barker having hastily installed a ‘new’ engine after it’s last outing. Murray Coulthard was fourth but that was his own fault. He slid off the road on third stage but he was carrying that much speed at the time that the Corsa grounded itself on a couple of rather large rocks. It took an awful lot of pechin’ and wheezin’ to drag him off with few spectators on hand to help. Mark Goodfellow had an ‘off’ too, but still finished fifth in class after spinning on the rain slicked mud under the trees on the second stage. Ross Carbry didn’t finish when the Corsa’s diff failed and Iain Miller put the Peugeot 106 off the road on the third test. Iain Stewart had more folk crowding round the Mini than a sweaty fat bloke attracting midges in a forest but even with the likes of ‘Kilmurray’ helping out he didn’t finish and Linzi Henderson had a bad day. She missed the first two stages with a fuel problem in the Peugeot 107.