This is an extended version of the Column which appeared in Motorsport News, 10 July 2013 … 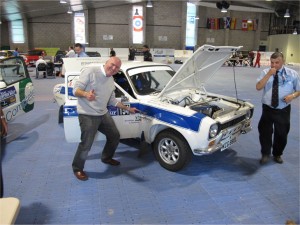 Andy Kelly is a lovely bloke. He’s also an astute business man, and can be pretty single minded when money is at stake. Hard nosed even. But he’s a sucker for automotive metal and the sound of an internal combustion engine. That makes him just as dopey as the rest of us. But he has a weakness for one vehicle in particular. His meticulous Mark 1 Ford Escort. He calls it Walter, and the name is signwritten on the front grille. It’s his personal tribute to a man called Walter Hayes.

In fact we should all pay tribute to Walter Hayes. 45 years ago this year it was the Vice President of Public Affairs, Ford Europe, who persuaded his bosses at the Ford Motor Company that Ford should get more involved in the growing sport of special stage rallying. At that time, spotlights on the roof and string backed gloves separated rally cars and drivers from road cars and motorists.

Although the Ford Cortina had taken over from the Consuls and the Zephyrs, it still looked rather ungainly in an unnatural habitat. It looked like a big lolloping dug chasing a ball in a bouncy castle. What Walter was after was a bit more pizzazz, to excite the youth of the day who had more disposable income in the late 60s than ever before. Brylcreem had given way to the quiff, chrome buttoned blazers to drape jackets, and the big band sounds were being drowned out by the amplified guitar strumming assault on the eardrums by growing numbers of pop groups.

This was a time of change, free from the restrictions of war, with new ideals, new desires and easier access to cash and credit. The result was the Ford Escort Twin Cam, a nimble, quick and affordable, little car – and the rest, as they say, is history.

Coincidentally, it was Walter Hayes who almost singlehandedly signed off the deal between Ford and Keith Duckworth and Mike Costin to design and build a new engine for Formula 1. The result was the Ford Cosworth DFV which powered the new Lotus 49 to victory at Zandvoort in 1967, and driven by one Jim Clark Esq. In other words, Walter was not only a man of vision, he was a man of action. A man who will never be equalled in these politically correct, budget conscious, sanitised modern times. A maverick, and an absolute gem.

During the second world war, the country’s forests had been decimated. They had been stripped of wood for construction and mining, fuel and pulp for paper. Fortunately, subsequent governments realised the importance of this natural resource instructing the FC to re-stock the nation’s woodlands and forests.

Along with that expansion in planting, roads were built to facilitate access and to extract felled timber later. A fact spotted by enterprising rally organisers. And with the changes to public access – and not a mountain bike in sight – rally organisers were spoiled for choice.

Forest stage rallying had been growing in popularity since the first roads were used in 1960. This dynamic change to the sport attracted new competitors and even more spectators. Previously fed on a diet of road sections and off-road tests, this more spectacular version of the sport enthused those who took part and excited those who watched. Facts noted by the manufacturers, primarily Ford, through the shrewd and far-sighted Walter Hayes. The big attraction here was that the cars looked almost exactly the same as those sitting in showrooms. Hence the phrase, “win on Sunday, sell on Monday”.

The Ford Escort and the Forestry Commission – 45 years ago, this was a match made in heaven.

Now though, things are changing again, and fast. From 1.25 million hectares (3.1m acres) of forest in 1976, the current size of the estate has been virtually halved to 700,000 hectares (1.7m acres). Not only that, increasing demand from other outdoor pursuits is further restricting what the FC is making available to rallying. Our sport is under threat like never before.

Where car clubs once had a choice of roads and routes, they are being barred from access or restricted in choice. Fewer new roads are being built as contractors seek other forms of extraction, like sky-lining, and those that are already in place are not being maintained to the standards required by rallying due to cost. Rallying must share some of the blame here too with powerful engines, sophisticated transmissions and grippier tyres causing more damage to traditionally built gravel roads.

And if we don’t do something about these issues now, forest rallying will be reduced to a footnote in British sporting history.