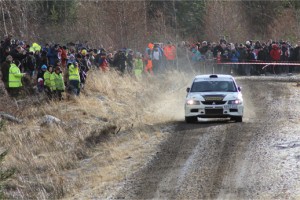 Once upon a time it was easy to spot the Marshal. He/she was the one wearing the reflective tabard/jacket. Now everyone is at it.

For forest rally drivers, what once provided a welcoming embrace of conifer green interspersed by the directional flash of an orange arrow or the authoritative dayglo yellow of a Marshal’s tabard, is now a splash of nuclear orange and yellow sick smeared across the horizon. Marshals and signage no longer stand out, they merge invisibly into this multicoloured clot shop.

Which begs the question, how can marshals exercise any authority over the unruly, the unwise or the unaware if they cannot immediately be recognised?

So who is to blame for this insane desire to buy and wear illuminescent clothing? I blame the orange people, those victims of tanning salons and spray booths who glow like well-slapped Tango extras. The trouble is, normal clothing looks drab and uninteresting when placed next to this unhealthy glow. That meant the clothing designers had to come up with ever more garish garb creating a ‘look’ that is slavishly followed by the ‘well gel’ generation.

But it’s not only fashion that is driving this desire to be seen and inflict pain on other folks’ eyeballs. The Health & Safety Gestapo must share some of the blame too. They are promoting a culture of ‘be seen, be safe’ and laudable though that is, it has started to desecrate our high streets as well as invade our workplaces.

This ‘company clothing’ is now worn on the way to work, and on the way home from work. On the bus, on the train and in the car. Schoolkids wear it, bobbies on bikes, window cleaners, road digger-upperers and dog walkers plus dogs wear it. It’s also worn at weekends going shopping, going to the pub and of course going to rallies.

The thought processes are entirely understandable. Wearing something bright in the forest is a good safety measure. But for whom? 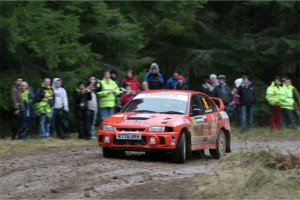 The background is just a blur of colour these days.

Neon, dayglo and fluorescent colours are excellent inventions, but it’s gone too far. We need something new to make officials and marshals stand out from the crowd. We need to give them half a chance to exercise control and authority and we need to give competitors something immediately identifiable.

I’ve had a few ideas. Issue flashing noses left over from Red Nose Day or cyclist helmets with a ribbon of LEDs around them to all marshals, or maybe borrow that well proven idea of traditional student headgear – traffic cones, but the marshals’ versions are illuminated.

Seriously though, this surely is a case for the sport’s governing body to take on board. Using their centralised  buying power they could commission one design and standardise one colour and make the resultant apparel available cheaply to all car clubs.

At one stroke we would remove all the different style and coloured tabards and jackets that each club produces individually. This would give our marshals a fighting chance to stand out and exercise guidance and authority.

Spectators need to know who is in charge and be sure they get advice and instruction from the right people – not just any numpty with a hi-viz vest.

Lives could depend on it.