You are here: Home » Rally Reports » 14 May: Quintin’s Sprint Finish

What a belter of a day out at Fort Augustus. It rained all the way up there from Lanarkshire to Inchnacardoch, and then it stopped. That meant the first runs were slippery and although the corners cut up a wee bit during the six Special Stages, there was more grip to be had by the end of the day than there was at the start.

Even so Quintin Milne set the fastest time of the day on his second run and then promptly retired the Lancer: “I was in a ditch that time,” said Quintin, “there was a big puddle in it. I was sitting there thinking that if there was a puddle then there must be something at the end of it! It must have been something solid, it’s damaged the strut and there’s a rattle coming from the front end, so I didn’t want to risk it any more with the Jim Clark Rally coming up.”

He therefore set the marker for the rest of the 26 car entry with a time of 1m 45 seconds for the 1.2 mile test, but that didn’t stop the others from trying and there was a wee bit of nail biting during the final runs when the winner’s early margin started to get cut back. 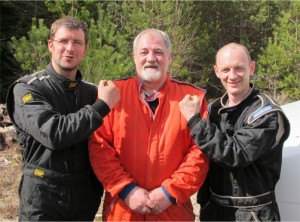 The Ronaldson clan – that’s faither in the middle!

In second place after the first three runs was Steven Ronaldson in the Metro. He was six seconds behind Milne at that point and then started whittling away at the gap. Mind you, Steven had a couple of incentives. Davie Wilson was out in the MkII and although initially 6 seconds slower than Steven, he got that down to 2 seconds over the next two runs. Equally, Steven’s Dad Henry was having his second ever drive in the double-entered Metro. He was 13 seconds behind ‘the boy’ on the first run and thereafter reduced the gap and bettered his time on every single run. That in turn put more pressure on Wilson!

Then Richie Ramsay entered the fray. A couple of slow times in the morning left the Subaru in seventh place, but as the ground dried out in the afternoon he got quicker then put in a blistering quick time on his final run. He was one of only four drivers to break the 1m 50s barrier

That meant that Wilson dropped from third to fifth, but who was third? It was Ronaldson Snr who rose to the occasion. He was second fastest on the final run to Steven by 8 tenths of a second and just pipped Richie by 3 tenths. Ya beezer. That’s one for the ol’timers.

Rounding off the top six was a third member of the Ronaldson family, Steven’s younger brother Kevin in his Subaru Impreza. He saw his Dad’s time and then just shook his head, putting it all down to the superior power of the Metro. Sore loser? Not a bit of it, but it’ll take a while to wipe the smug smile off his Dad’s face. Guess who’s got bragging rights now?

Top 1600 runner on the day was Kenny Wood in the Sunbeam just holding off the 2 litre Sunbeam of Neil Morrison by less than half a second. Ian Cattanach might have made more of a fight of it but the Sunbeam sheared its disc brake bolts, and although he replaced them he remained unsure of the car and didn’t d the final two runs.

Calum Strachan had wheeled out his EVO4 for the second time but opted out of the final two runs and is saving himself for the Speyside! Rounding off the top ten places overall was Keir Beaton in having only his second run out in the Honda Civic and taking second in the 1600 class. He was fairly pleased with his result after a day spent fiddling, sorry fine-tuning, the suspension.

First time out for 6 months, Willie Lawrie was 11th in the Colt while Jimmy Allan had put a battery in the EVO6 and some air in three of the tyres: “I forgot about the fourth one,” he giggled, and finished 12th.
Thirteenth, and saving himself for the party, was Brian Watson; “I pit it aff on the third test,” admitted Brian, “it was the second bridge. I just came in too hot, slid wide and broke a steering arm and burst a brake pipe’”

With Cattanach’s time still good enough for 14th, Paddy Munro scored 15th place overall and was third in the 2 litre class in his MkII.