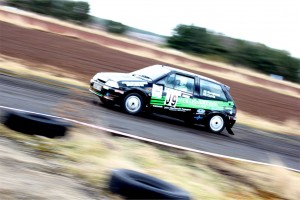 Ally Currie in the Citroen AX

Even with a new co-driver Alex Vassallo continued his winning ways, with Michael Gilbey alongside in the Citroen C1, when they won the opening round of this year’s Brick & Steel Junior 1000 Ecosse Challenge at Charterhall. The reigning Champ got off to a flying start, more than half a minute clear of the rest of the field, to take a lead he was never to lose.

But the others can take heart. Perhaps Alex’s secret is that he always gets out of the blocks quickly and then maintains that pace throughout the day, while his rivals tend to start slower and build up their speed. At the end of the rally, a quick look at the stage times shows that the pursuit wasn’t far off his pace by close of play.

Even so, Alex didn’t have things all his own way: “It got stuck in second gear in the third stage when the gear linkage cable snapped,” said Alex, “but I was only worried about it getting out of the hairpin. It was fixed for Stage 4 but then I bashed the front bumper at the chicane when it locked up on the loose.” He also dinged the rear bumper!

Ryan Weston and Mark McCulloch got off to a slow start in the Peugeot, and then had a puncture in SS3, but by the end of the day were nipping at Vassallo’s heels, so know what has to be done next time – start quicker!

Harry Marchbank was fourth fastest on the opening test in his Nissan, but slipped back during the day aided by an encounter with a large tyre marker on the third test. When asked what he hit, his co-driver Jordan Black was heard to mutter: “What did he no’ hit?” but the youngster was unperturbed: “We just hit the tyres on the outside of a bend and it removed the bumper, there was no mechanical damage.”

That meant the Nissan Micras of Ben Crealey and Michael Dickie swept past to claim third and fourth. Crealey had sorted out his Micra’s ‘loose rear end’ after Anglesey and Dickie’s co-driver Euan Duncan had to physically hold the master switch button for the whole of the first two tests when the car cut out.

And a year after his rallying debut on this event, Alex Adams completed the top six. “The clutch failed on SS4 here last year,” said Alex, “but it’s been OK today, although it’s a bit twitchy at the rear end under braking.” Well, maybe there’s a reason for that young Alex – you’re going a bit quicker than you were last year (Ed)!

By the close of play there had been two Micras in the field in the middle of the circuit. Michael Robertson’s wee car struck a tractor tyre (nearly the same size!) and got bounced into the rough but soon got back on the road, and Brandon Walsh’s car got out of shape on the pebbles and understeered off into the sheuch. He got out and carried on but electrical problems prevented a finish. Along with Walsh, the only other non-finisher was Andy Struthers whose times in the Micra were getting better but suffered a mechanical problem on the final stage.

Scott Murray also finished but will have some panel beating work to do before Ingliston: “I spun into a massive boulder,” said Scott, “I was braking on loose gravel when it spun and hit the driver’s door and sill, but we finished.” Budget rallying? He’s still using last year’s tyres!

Ally Currie was pleased with tenth overall, but: “We’re down on power compared to the Nissans,” said the Citroen AX driver, “we’re giving away 10 mph flat out on the straights. I had two big moments on the first stage and the car was up on 2 wheels at one point, but we’re OK.”

On this showing, Vassallo is still the guy to beat, but also, the pursuit is getting quicker and more experienced too, which bodes well for Ingliston at the end of this month. A record number of 17 young drivers had turned out for this first round of this year’s Junior 1000 Challenge and Digby reckons there might be a few more at Ingliston. And you know what, all the spectators enjoyed their antics too!