Here’s a question for you, and think carefully before you answer. If you have a limited budget to spend on your rally car, which would you rather have? More power, or more grip?

Since this is mainly a manly sport, the natural gut response from most men will be, more power. But then if you stop and think a wee bit harder, what use is extra power if you don’t have the grip?

Fortunately there are some intelligent life forms in our sport, although they can be hard to find at times. Very hard to find. One such outfit is Clone Motor Sport in Mochrum. I was told it was near Newton Stewart . It was nearer Ireland for gawd’s sake!

Anyway, despite the ‘help’ I found the place. They’ve got a post code all to themselve 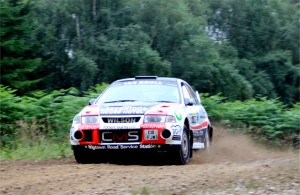 s. This is where Fraser Wilson and Steven Broll run their small, but very professional operation and the first thing that struck me on my visit to this remote outpost of civilisation was the sheer dedication of the boys, sorry, young men, who are faced with a huge trip every time they load up for a rally. For instance, it’s 280 miles to this weekend’s Inverness season opener, and then they’ve got to go home again afterwards.

That’s quite a prospect for any team, so Fraser and Steven are always looking at ways to extract the best value for the budget they have to spend, and they took a surprising decision prior to the start of last season.

Two years ago they purchased a Mitsubishi Lancer EVO6 to replace the Nova in which they had won Class 2 in the national Scottish Rally Championship – and which had itself replaced the original Nova which had come to a sorry end in a Perthshire forest.

When the first Lancer arrived it was set up to run on ‘racing fuel’ so they stuck with it for the first few events as a learning curve, but if they thought buying fuel for the Nova was expensive they were in for a financial shock.

“We ran it for 2 events on the super high octane fuel, as it came mapped for it,” said Fraser, “We’d never used it until that point so tried it, but it was clear that it was too expensive so after the Border Counties we took it to get re-mapped to run on pump fuel, and kept it that way for the whole time we had the car.”

Coming from two wheel drive to four wheel drive was a new experience for the lads, but even so, they reckoned they could get more out of the Lancer by making more of the potential for grip through its total traction drive system. That meant buying new tyres more often, rather than buying new tyres less frequently and running them till well past their ‘grip-by’ date.

Looking at the figures at the end of the 2011 season (9 events) they were spending £3.30 a litre (incl. VAT) on ‘race fuel’ as opposed to £1.30 for BP Ultimate at the local garage. On each event, the car’s consumption averaged out at around 100 litres, so they did the sums! That’s a 200 quid difference per event.

“We were told that changing fuel would cost around 25 bhp,” said Fraser, “but the car turned in better and gave us more grip out the corners, so what we lost in grunt we made up for in grip. However, the biggest difference was that the car was more stable at speed, and especially under braking.”

The boys scored their best ever rally result when they finished tenth on last year’s Colin McRae Stages Rally. Yes, they were a more experienced crew by this time and used to the car, but it surely must also have been down to improved grip and more confidence as well?

“It gave us more choice as well,” said Fraser, “for instance, on the Merrick last year, we used four used tyres on the first short stage, and then put the new ones on for the 19 mile second test. Just starting that long test on fresh rubber gave us more confidence as well as better grip throughout the stage.”

Apart from the facts and figures there were a couple of additional benefits. “The local garage sponsored our rallying last year by donating 100 litres of pump fuel (BP Ultimate) at the start of each event and putting some diesel in the service van,” said Fraser, “they couldn’t do that if we were still using special fuel, so that’s an additional huge saving over a season.”

And there’s more. “At the end of the season we had built up a stock of 8 used and 2 well used tyres – and we sold them for a hundred quid to a delighted fellow competitor!” said Fraser.

With two seasons’ worth of experience running the EVO6, the boys felt confident enough to move up a level for the 2013 series. “We’ve bought an EVO8,” said Fraser, “and the plan is to run it in Group N and go for more top ten finishes. We looked at an EVO9, but the price difference was too big and we’re happy enough with this.”

“Luckily, and unusually, the new EVO8 arrived with us already mapped for pump fuel – so that’s the way we’ve kept it,” said Fraser. Clone Motor Sport will therefore run the new car on 102 octane pump fuel again this year, while again keeping a careful eye on costs.

So there you have it, the case for pump fuel. And here’s another thing to toss into the considerations. More power will destroy tyres more quickly and put additional strain on driveshafts.

The choice is simple – more success, or more expense?

( My thanks to all the guys and guyess at Clone Motor Sport for their kind hospitality and warm welcome to this awfy faraway place! )