If the rest of the season goes anything like this, the 2013 Blue Scottish Tarmack Rally Championship is going to be a cracker. At the end of the Grant Construction Knockhill Stages Rally opening round last weekend, the top two tied on identical totals while the third placed man was only 4 seconds behind. And there’s more, the fastest man on the stages didn’t win! 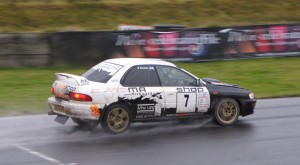 The record books will show that Stuart Baillie and Alan Cowan won the first round of the 2013 Blue series, but only after the tie decider ruled against Lee Hastings and Brian Findon, while Stuart Walker and Julie McGuire were only 4 seconds behind the leaders. What the record books might miss is the fact that Ross Hunter was going like a ferret with its tail on fire.

As it was, Knockhill provided an excellent spectacle for the punters. It didn’t have the snow of two years ago and was a bit warmer than last year, but the track was wet and greasy all day with a few heavy rain showers scudding across the scenery to keep things wet.

So how wet was the track? Top seed John Rintoul put the EVO8 off on the first stage. No damage, just stuck in the glaur and was effectively OTL although he got some mileage in later in the day.

Equal fastest on the day’s opener were Stuart Walker in the EVO9 and Ross Hunter in the 2 litre Peugeot 205. Ricky Wheeler in the MkII and Lachlan Cowan in the Fiesta ST were only a second behind the leaders which only proved that the 4WD boys weren’t going to have things all their own way despite the greasy nature of the track.

Walker equalled his first stage time on the second run and was fastest from Colin Gemmel in the Impreza with Stuart Baillie third fastest in his Impreza just ahead of Hunter, but Baillie was already in trouble: “I broke third gear on that run. It seems OK, so we’ll just see how it goes,” he said.

Lachlan Cowan was fastest from Ricky Wheeler on SS3 with Hunter right on their tail but Walker was in trouble. The brakes were locking up. He had to do the fourth stage as well before he could get them fixed during the lunch halt. That allowed Hunter to hit the front, fastest on SS4 from Cowan and Lee Hastings in his Impreza.

But it was now Hunter’s turn to look concerned, the Peugeot had been misfiring on the fourth test and he felt the engine tighten as he slowed for the finish. The crew were puzzled, as the new engine had only done Mull and Crail since it was put in the Peugeot, but the decision was taken to take it out and stick the old engine back in. This was the 180,000 mile Xantia engine which was still lying in the back of the truck!

Everyone knew it would be a close run thing to do the job but they went at it like a swarm of Hieland midgies on an overweight tourist. Fingers crossed they joined the end of the rally queue at the start of the fifth stage.

From this point on ‘the Hunter’ became ‘the Entertainer’. Honestly, watching that wee Peugeot getting the living daylights thrashed out of it was a hoot. Rarely was it pointing in the right direction, even on the straights. Laugh? I nearly wet my troosers – or was that the rain? He was fastest on the fifth test from Wheeler and fastest again on the sixth from Baillie and Walker, who had his brakes fixed and was now back n song and hell bent on catching those in front having dropped to fifth place.

Then the rumours started to spread around the service area, Hunter had exceeded his penalty free lateness in trying to get the car back on the track, but the organisers could only confirm their findings once the Marshals Check Sheets had been handed in.

By this time, the final two stages were underway. Nothing was going to stop ‘Hurricane Hunter’ now. He shared equal fastest on the 7th test with Colin Gemmel who had finally woken up, but Walker was only a second slower than the two of them.

Going into the final stage, Hunter was still leading Baillie, Hastings, Walker and Gemmel. As it turned out, Hastings and Gemmel were equal quickest, but Hunter was only a second slower. And then the organisers confirmed Hunter’s worst fears. He had been declared OTL. A cruel blow considering his pace and the efforts of his family and friends, but philosophical too, he had been prepared for the worst.

And so it was that Baillie took his first STRC win and set himself up with a decision ahead of the new season – he now leads the Blue Scottish Tarmack Championship. Hastings was left to rue missed opportunities: “I just left it all too late but I enjoyed the day and just loved the Knockhill kerbs – it was like a Touring Car round there, up on 2 wheels over the kerbs!”

Walker was still pleased with third after his earlier braking issues, but he can smell his first victory now while Gemmel was pleased with fourth: “It was the best I could have got on those tyres,” he said, “I bought them from Jim Sharp – I still don’t know what they are!”

Fifth and top 2WD runner was Ricky Wheeler: “I had forgotten how much fun this place was,” he said, “this was my first time here since 2005.”

Billy McClelland scored sixth in his EVO3 with Alan Gardiner seventh in his MkI: “It was too low for this place,” said Alan, “it was fine on the circuit itself but there were some bumpy and rough patches on the rally stage’ part where I had to be careful.”

Graeme Schoneville was top FWD runner with Hunter’s demise, but the Honda Civic was running out of puff on the faster parts of the circuit while Stephen Lockhart was ninth with his Mum, Julie, co-driving. Rounding off the top ten was Ian Forgan in the Ford Ka just beating Sean Robson’s Fiesta by one second.

George Bryson was twelfth in the wide track MkII but only after he had cleaned the wire mesh from the air filters out of the air intakes on the fuel injection. In thirteenth place was Graham Bruce in his EVO4 just ahead of Lachlan Cowan. Remember him? Lachlan had been as high as second overall earlier on but as the big cars got quicker, Lachlan tried a demon overtaking manoeuvre on the last stage when he caught a slower car.

He attempted to go the long way round the outside of the slower car on the approach to Quarry bend (the Stock Car oval) at the end of the Start/Finish straight. It was all going perfectly well to he got alongside half way round the corner when he suddenly saw the tyre markers. He was faced with three choices, try and shove the car on his inside further left, headbutt the tyres, or take to the boondocks. He took the latter, least damaging course and sunk to his axles in glaur. It took nearly three minutes for the Marshals and crew to get him out. Mind you, he would have been a hero had it come off!

As for Quintin Milne, the least said the better. He finished dead last, but going by his pyrotechnic driving style that appeared to be his aim. Admittedly he was fifth equal fastest on the first test and pretty damn quick on the second, but that wasn’t enough for Quintin. If Ross Hunter was ‘the entertainer’ then Quintin was ‘the comic turn’, the whole point of his day out appearing to be to provide the drookit spectators with a bit of festive fun. As for his lines through the Knockhill hairpin, they were getting wilder every time, as he exploited new limits with the MkII, at one point contriving to arrive at the hairpin backwards – and he still made it round. Magic, pure magic.

Douglas Humphrey won Class 1 in his Mini from the Peugeot 106 of Ian Miller while Schoneville took the Class 2 victory ahead of James Thomson in the Peugeot 206. Des Campbell was in the hunt for Class 2 honours till a front wheel puncture cost him a Maximum on the penultimate test and he didn’t finish the last run. Ricky Wheeler took Class 3 honours, Alan Gardiner was victor in Class 4 and Baillie clinched Class 5 on his way to overall victory.

But if that was a sample of what’s to come in this year’s Blue series then don’t miss Round 2 at Charterhall in March – just a pity we have to wait so long!