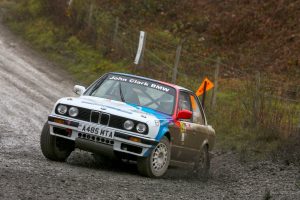 Top class rallying really is a world apart from all other major league sports: the action is staged miles from the beaten track; the extraordinary high-speed spectacle rewards like no other and, incredibly, it is a sport which offers enthusiastic local amateurs the chance to compete on the same high-profile bill as Sébastien Ogier, the reigning world champion.

Indeed, this autumn’s Wales Rally GB (3-6 October) provides competitors with not one but two fantastic opportunities to be part of this country’s round of the celebrated FIA World Rally Championship. British crews wishing to pit their skills against their illustrious WRC counterparts have the choice of entering the full four-day World Championship event or the cost- and time-saving two-day WRGB National Rally, full details of which are announced today (Thursday 6 June).

As has proved so popular in recent years with both competitors and fans, the WRGB National Rally shadows the full World Championship event giving enthusiastic entrants a real taste of the premier league WRC action and spectators yet more trackside entertainment to savour.

All those contesting the WRGB National Rally are based together with the star-studded WRC teams within the event’s busy Service Park, now moved to a vibrant new home in the resort town of Llandudno. They will compete against-the-clock on the same gravel forest tracks, in front of the same huge crowds, and honoured on the same finishing podium.

The event includes classes for both contemporary and historic rally cars with the presence of icons from yesteryear such as Ford Escorts, Subaru Imprezas and even VW Beetles always being a massive huge crowd-pleaser.

In total, the 2019 WRGB National Rally offers 85-miles of top class rally action on some of the world’s most challenging and famous special stages.

The action starts in north Wales on Friday with four classic special stages set in the forests of Elsi, Penmachno, Dyfnant and Aberhirnant plus a visit to Slate Mountain where the speed test at the renowned adventure sports venue high up in Snowdonia has now been resurfaced to forest standards.

Following a well-earned overnight stop back in Llandudno, the battleground then switches to mid Wales with three longer and more exhilarating timed stages on what’s rightly billed as ‘Super Saturday’. Dyfi, Myherin and Sweet Lamb Hafren are all hallowed in rallying folklore and, with all three world championship stages each totalling around 15-miles in length, they will provide a challenging and rewarding finale to the 2019 WRGB National Rally.

Surviving crews will return to the seafront in Llandudno for a well-deserved Ceremonial Finish and prize-giving on the World Championship podium.

With so much to offer, recent WRGB National Rallies have proved incredibly popular often selling-out swiftly. This year is expected to be similarly oversubscribed when online entries – priced at £990 (exempt of VAT) – open on Wednesday 07 August.

“There are not many sports where amateurs can compete alongside their heroes and the WRGB National Rally is a wonderful opportunity for crews from all levels of the sport to test themselves against the world’s very best on some of the world’s finest forest stages – also to savour the amazing atmosphere of a WRC event,” said Hugh Chambers, Chief Executive of Motorsport UK, organiser of Wales Rally GB.

For spectators keen to experience this year’s Wales Rally GB and accompanying WRGB National Rally, a wide range of early bird tickets are already on sale offering significant savings for those booking now.

An adult Day Pass provides access to all stages on the selected day and, for early birds, costs £32 for Friday and Sunday and £35 for ‘Super Saturday’. Providing extra value for money, every adult ticket includes a free glossy programme priced at £9*. Accompanied children aged 15 and under are offered free admission.

The early bird price of the premium four-day World Rally Pass, ensuring access to all 21 competitive special stages on Friday, Saturday and Sunday as well as Thursday’s pre-event Shakedown, is priced at £109. Befitting the standout value of this prestigious ticket, purchasers will receive a programme, a hard pass and lanyard by post plus a special car pass that offers free overnight parking where available.

World Rally pass holders are also offered access to the Thursday night curtain-raiser at Oulton Park for a £5 supplement. Adult tickets for the Oulton Park can be purchased for £25 per adult with a £25 Grandstand upgrade option also on offer. Access is strictly via advanced tickets only as no tickets will be available on the gate.

Full details of all ticket opportunities as well as full event information can be found on the official walesrallygb.com website.