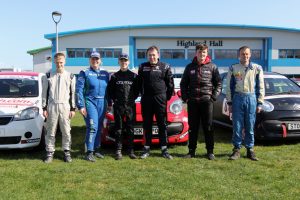 Many tall tales start with the phrase, “There was a Scotsman, an Englishman and a Welshman (or an Irishman) …..”.

Well, on 31st March 2019 at the DCC Junior Stages Rally at Ingliston, Edinburgh this was very much the pattern in the winner’s enclosure. The rally attracted 15 young drivers from all four UK nations to fight it out on the tight and twisty service roads within the Ingliston Showground in their 1000cc rally cars. The event was a counter in the Junior 1000 Ecosse Challenge (Scotland based) and the Junior 1000 Rally Championship (England/Wales based). A couple of competitors were entered in both Championships.

Anderson/Steven Brown doggedly chased Lloyd/Jonathan Jackson over the 8 stages of just under 5 miles each. But Lloyd kept himself just a few seconds ahead on each stage and finished 16 seconds in front after the final stage. However maximum points in the Ecosse Challenge was the goal for Anderson and he drove to a pace to safely achieve that. Lloyd took maximum points in the Junior 1000 Rally Championship.

Archie Swinscoe and Billy Grew battled all day for 4th place, with Grew getting off to a quicker start before being hauled in by Swinscoe over the afternoon tests. Partnered by Jane Nicol who had finished 2nd overall on the Senior event the day before, Swinscoe said at the finish: “I just managed to grab 3rd on SS6 and hold on to the finish but Jane was egging me on to repeat her previous day’s result when she finished 2nd on the Senior event!” Grew and Emma Morrison did manage to snatch one second back on the final stage but it wasn’t enough and they finished the rally 4 seconds apart.

Finishing in 5th place overall, but 2nd on the Ecosse Challenge podium, were Lewis Hooper and Sam Bilham in their beautifully prepared Nissa Micra. Hooper drove at a very tidy and consistent pace all day but was not really able to match the pace of the newer cars in front.

And 3rd on the Ecosse Challenge podium was Irishman Marcus Mcelwee (Skoda Citigo) with John Henderson co-driving. They finished one place behind Hooper and were surprised and disappointed that they couldn’t get the Citigo tuned in to the challenging stages at Ingliston.

James Hancock and Ian McRae finished 9th with Ian looking as happy as a Basset Hound with no bone at the finish: “I marshalled at the Split all day yesterday, and still got it wrong today,” he admitted,” and sent James down the wrong way.” Sadly, there wasn’t enough strong drink at Ingliston for him to drown his sorrows. As it turned out, the wrong slot only cost them one place. Little consolation though, eh?

Rounding off the top ten were Erica Winning and Ellya Gold ahead of Thomas Johnstone, Harry Walshaw and Aaron Webster. Daniel Hurst did manage to finish but scored two Maximums on the first two stages when a wheel came off the Peugeot on the first stage and he had to wait till the second stage was finished before the car was rescued from the stage and repaired.

14 out of 15 cars finished with Oliver Hunter/Michael Cruickshank (Peugeot 107) being the only non finisher when a drive shaft broke on the first stage and then when they got that repaired and rejoined, the gearbox started making noises that a gearbox shouldn’t make, so they pulled out.

The conclusion by everybody involved – a fantastic rally, well organised, very efficiently set up and marshalled. And the sun shone out of a clear blue sky all day.

There is now a short 2 week gap before the second round of the Junior 1000 Ecosse Challenge – the Memorial Garden Stages at RM Condor, Arbroath on 13th April. The Junior 1000 Rally Championship participants will also be out that weekend but down on Anglesey at the SMC Stages. 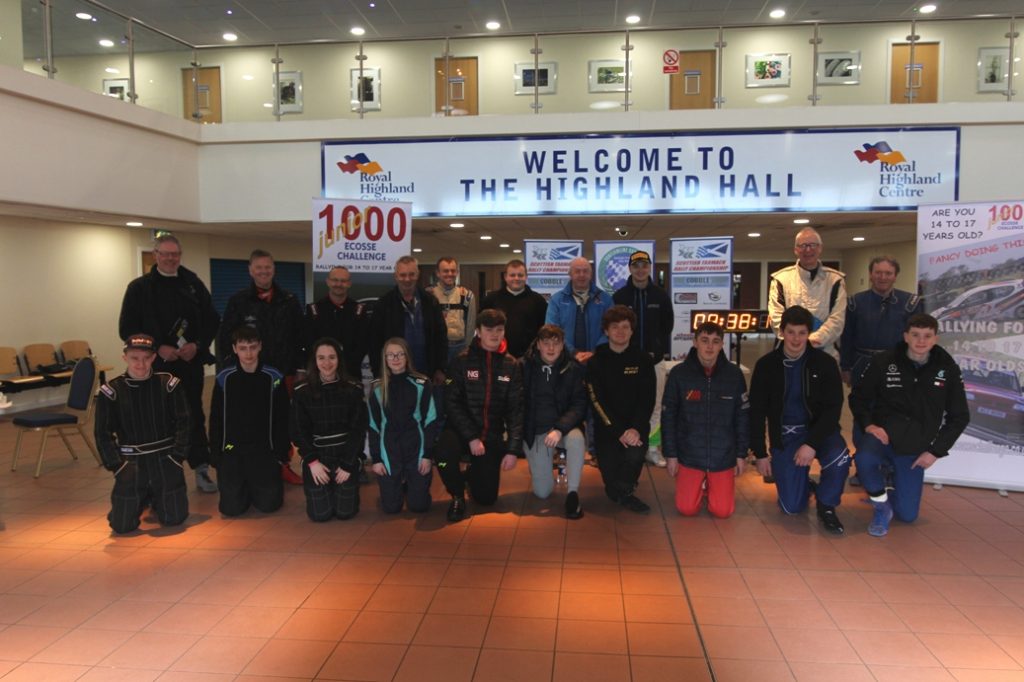