The day turned out to be one of Joy, Despair, and Drama with the weather adding to the situation. Joy for the 6 crews who came through the day relatively unscathed and Despair for the other 8 who experienced all sorts of problems. Drama came on the second last stage when hard charging Ollie Hunter/ Tom Hynd (Peugeot 107) ended up on their side.

Things started to go wrong on the second stage, when the winner of round 1 – Lewis Haining/George Myatt (Skoda Citigo) – broke a drive shaft at a hairpin and got a stage maximum. That put Johnnie Mackay/Gordon Reid (Suzuki Alto) into the lead but with F1000 J1000 crew Elliot Payne/Simon Rogers (Citroen C1) breathing down their necks.

Going into stage 8, Mackay had a 3 second lead but he fell foul of the wet conditions and ended up off the road on the grass earning a stage maximum for his efforts. Payne then moved into the lead by 23 seconds from Peter Beaton/Andrew Grant (Peugeot 107).

Beaton put up a good fight and had reduced the gap to Payne to 19 seconds by the end of stage 12. But Beaton was under pressure from Lewis Winder/Mike Baird (Nissan Micra) all day and there was never more than a few seconds between them.

At the end of stage 12, Payne led by 19 seconds from Beaton, who was now in a tie with Winder. Andrew Blackwood/Richard Stewart (Citroen C1) were in 4th place, 10 seconds behind Winder, regretting the earlier spin when he lost at least 10 seconds.

But it all went wrong for Payne in the 13th stage. After an overshoot at the stage split, he reversed back down the stage and was disqualified and excluded because of this manoeuvre. This put Beaton into a slender lead over Winder with Blackwood trying hard to get into the act. Going into the last 2 stages the top 3 were Beaton, Winder, and Blackwood. There was 3 seconds between Beaton and Winder’s old faithfull Micra with Blackwood 9 seconds behind Winder.

And, would you believe it – they all matched the same total time over the last 2 stages – 3mins 20 seconds. So Beaton took his maiden victory in the Junior 1000 Ecosse Challenge and Winder took a Micra onto the podium for the first time in a long time. Blackwood was justly rewarded with a podium 3rd place. And coming home in 4th place was one of our newcomers Fraser Anderson in another Micra on his 3rd rally after a very solid and competent drive throughout the day under the watchful eye of experienced co-driver Graeme Sherry.

Further down the results sheet was the despair and drama part. There were 3 non finishers – Elliot Payne/Simon Rogers (excluded for reversing), Ollie Hunter/Tom Hynd (did not do last stage after being on his side) and Chris Hall/Niall Thomson (out with a seized engine). Out of the other 5, we had 2 broken drive shafts and 3 “off into the scenery” moments. So all in all a very full and exciting day.

It was a day of some great achievements for Peter Beaton, (first Junior 1000 Ecosse Challenge win) Lewis Winder (Micra in 2nd place) and Fraser Anderson (Micra in 4th place) but one of the stars who was not classified as a finisher had to be Oliver Hunter. His day was ruined when he broke a drive shaft on stage 6, but he then went on to post 5 stage fastest and 3 joint fastest times right up to the point that he rolled out of the rally on the second last stage. Definitely one to watch.

The next outing for the Junior 1000 Ecosse Challenge will be at the Granite Rally, Leuchars on 26th May 2018. 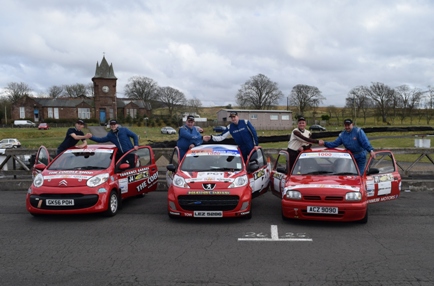