… Victory for MacDonald on Anglesey …

The Fifth anniversary of the Junior 1000 Ecosse Challenge attending the Glyn Memorial Junior Rally on Anglesey on 25/26th November was celebrated in style when top podium position overall was taken by a Scottish crew after 2 days of tough rallying.

A total of 9 crews headed South on Friday 24th to ‘acclimatise’ for the 2 day event which included 4 stages out of 8 in the dark on Day 1 followed by a further 8 on Day 2. Some had to fight their way through some of the first snow to hit Southern Scotland and everybody got a good drooking on the M6. But it was a happy eager bunch who gathered around the Saltire fluttering on the Championship motor home on Saturday morning. On Saturday the ‘senior’ rallyists took to the stages first, starting at 11.30am and the Juniors followed on at 12.45.

The first – and only real – disaster hit one of the crews just as they drove out of their parking space in service. The electric onboard fire extinguishing system on the newly re-shelled Suzuki Alto of Johnnie Mackay/Steven Hay went off and emptied itself. End of rally unfortunately as a working system is mandatory. But they did manage to source a new system and fit it during Saturday so that they could get some stage miles on the Alto on Sunday. The air of gloom spread through the Scottish camp as the other 8 headed out for Stage 1. 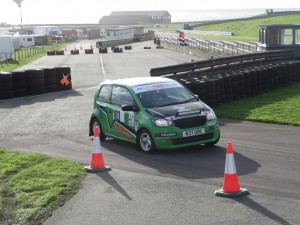 Things then perked up when the times for Stages 1 and 2 came in and Scottish crew Jude MacDonald/Michael Cruickshank in their very green Skoda Citigo went into the overall lead by 2 seconds which grew throughout the day to an 18 second lead. On Day 2, new tyres and daylight did not play in MacDonald’s favour though as a determined Elliot Payne from the F1000 Juniors put up a strong fight taking back a couple of seconds here and a couple there.

At the end of the final stage, MacDonald’s lead was down to 9 seconds but that was enough. P1 for a Scottish crew for the first time – much to celebrate. Co-driver Cruickshank commented: “Jude drove faultlessly all weekend taking a well deserved win!” This result also moved MacDonald up to second overall in the Junior 1000 Ecosse Challenge Championship

Adding to the joy on Day 1 was the crew of Lewis Haining and George Myatt in the bright orange Toyota Aygo. Lewis did suffer a couple of knockbacks including no brakes for most of Stages 1 and 2 and then a gear lever that was not connecting to all the gears. But they ended the first day in third place overall by 10 seconds despite attacking one tyre chicane in the dark which added additional black colour over the orange paint to Myatt’s side of the car. But it was only bodywork: “It will polish out,” proclaimed Dad, Iain.

Day 2 started well with Haining adding to his lead by 5 seconds over the first 2 stages. But then disaster on the third stage. Haining takes up the story: “Going round a long sweeping corner the car lost all power and we were forced to stop, turned it off and on again and all power was back, but wouldn’t rev past 5000 , managed to push on through that stage and gave it a hard re-set (turned it off left it for a minute and turned it on again) and everything seemed to be fine, lost about 25 seconds then spun on the next stage trying to make up lost time! Dropped down to 7th but kept pushing and managed to climb back up the leaderboard going into the last stage in 3rd with a 1 second lead over Ioin Lloyd but sadly losing out by 1 second.”

It doesn’t come any closer than that and the amount of rubber marks on the Toyota Aygo showed just how hard Haining was fighting. But as usual, Haining took it in his stride and joined in the celebrations. Fourth was still a brilliant result overall plus second in the Junior 1000 Ecosse Challenge. This secured him third place overall for 2017 in that Championship.

A couple of places back in eighth overall were Andrew Blackwood and Gordon Winning in their Citroen C1. They ‘played’ over the 2 days in a small group of 4 crews who were never more than a few seconds apart. But Blackwood lost seventh place by 2 seconds when he was beaten by 3 seconds over the final stage. But joy of joy, this put Blackwood into a podium position in the Junior 1000 Ecosse Challenge – the first in his 2 year career. That alone was enough to celebrate, and the always happy and carefree Blackwood was really chuffed. And it moved him to fourth overall in the Junior 1000 Ecosse Challenge Championship.

Apart from Mackay/Hay, the other 5 Scottish ‘travellers’ enjoyed a very testing rally and all left the venue very satisfied with no damage.

Peter Beaton/Dean Ross (Peugeot 107) finished tenth overall and fourth Scottish crew home after a trouble free run. This was a very mature drive from Beaton with guidance from experienced Ross.

On only his second rally and with Championship Secretary Ian McRae reading the route was ex karter Ollie Hunter in his Peugeot 107. After a cautious start over the first 2 stages the crew gradually built up the pace over the rest of Day 1 as Hunter got used to the longer stages and more wide open spaces. After some ‘over dinner’ encouragement from some of the ‘more senior members’ of the East Ayrshire Car Club present, Hunter and McRae started to build the pace up on Day 2 to record times comparable to the top 5 by the final couple of stages. They finished fourteenth overall but this does not reflect the potential in this young driver.

Finishing 1 place behind Hunter/McRae in fifteenth overall was Lewis Winder with EV expert Ellya Gold on the maps. After Day 1, the Winder Nissan Micra was 4 seconds in front of Hunter but fuel starvation problems were hampering progress and they dropped back on Day 2. But the crew were having a ball and the wee red Micra sounded terrific when it was on song. Big smiles all round.

And then we come to our 2 lady drivers. For Alice Paterson/Ian Crosbie, this would be their first visit to Anglesey in their Peugeot 107 and the first time driving in the dark for Paterson. But the pair – and the rest of the extended family of supporters – were having fun and enjoying themselves, finishing sixteenth overall.

This was Amy Mccubbin’s second trip to Anglesey, but with Robin Nicolson on the maps. It was all going pretty well until Stage 2 on Day 2 when they missed one of the splits and were penalised with a stage maximum. But the other blue Skoda Citigo didn’t miss a beat all weekend and they finished seventeenth overall.

Conclusion – A most acceptable weekend’s rallying shared with our English and Welsh cousins. Anglesey Circuit may be a cold place late in November but the welcome and warmth of the people involved more than make up for that.

This was the final round of the 8 round Championship and the next event will be the annual prize giving in Glasgow on 3rd February 2018.