One Apiece For Tindall and Retson …

Two days, Two rallies, Two different seasons and Two different winners!! That was the Kames Autumn Rally and the Albar Kames Trophy rally weekend on 24th / 25th September organised by East Ayrshire Car Club at the Kames Motorsport Complex, Muirkirk. 13 Junior 1000 crews made up the bulk of the entry on the Saturday and 14 on the Sunday. Saturday was wet and windy for most of the day whilst Sunday was clear with sunshine for most of the day and then very heavy showers from 4pm on. So the 2 rallies presented the young drivers with 2 sets of very different conditions. 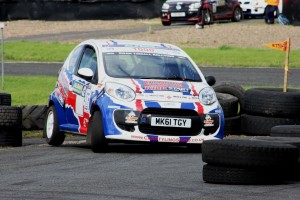 The overall winners on Saturday were Ewan Tindall and Paul Hudson (Citroen C1) and on Sunday it was Finlay Retson and Andrew Falconer (Citroen C1). Retson held a narrow 1 second lead on Tindall going into the midway stage on Saturday but overcooked it at one junction on stage 8 and dropped 33 seconds and down to 5th place. That left Tindall with a 9 second lead over new 2nd place team Josh Hislop and Ellya Gold (Peugeot 107) Tindall kept his cool and carried on at a steady pace with one eye over his shoulder at Hislop and took the victory by 7 seconds from a delighted Hislop who was enjoying his first time on the Junior 1000 Ecosse Challenge podium.

These were Hislop’s conditions and his smooth style was perfect for the changing and sometimes very slippy stages. And coming in 3rd another 7 seconds back after 7 fastest times and one equal time with Tindall was Retson. There is no doubt that the conditions tested these young drivers to the maximum but 13 cars started and 13 cars finished and were all set to do the same thing the following day. 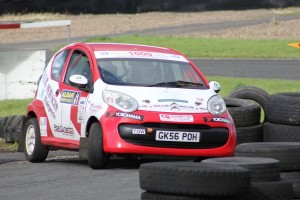 Day 2 dawned fair with sunshine but cold. Retson set off to make sure that he did not have a repeat of the day before but Tindall and Hislop had other plans. After 4 stages, Retson had opened up a 2 second gap over Tindall and 6 over Hislop. This pattern continued up to the half way stage when Retson had a lead of 7 seconds over Tindall by clawing a second here and a second there. Hislop was hanging in there and was 7 seconds behind Tindall. But Hislop was also in danger from Harry Chalmers/Steven Brown (VW Up) who were only 4 seconds behind.

The pace was pretty hot!! But it all went wrong for Hislop on stage 14 when a problem on the approach to the infamous Chicken Run saw them catapult off a set of tyres and enter the Chicken Run upside down and airborne! The crew were shaken and the car dented but both crew walked out of the stage followed by their Peugeot 107 driven by one of the recovery crew. Chalmers then moved to 3rd place and the finishing podium was Retson/Falconer; Tindall/Hudson and Chalmers/Brown. 14 cars started and 13 finished.

Ewan Tindall continues to lead the driver’s Championship after 6 of 8 rounds and Finlay Retson moves up a place to 4th. But after the next round, dropped scores will have to be taken into account. So the battle for the top places will be on.

Next outing will be on the brand new event at Leuchars MOD base on 22nd October.