Plans for the 2016 Wales Rally GB National Rally have been announced today (Wednesday), providing British crews with a fantastic opportunity to compete in front of huge crowds on the same legendary special stages as their FIA World Rally Championship counterparts.

The National Rally’s three-day itinerary shadows the WRC route with single runs through all 12 of the timed stages, offering 107 miles of top class rally action on some of the world’s most challenging and famous forest tracks.

The WRGB National action starts in mid-Wales with the legendary tests of Myherin, Sweet Lamb and Hafren on Friday morning which, as with the International field, will be run in the reverse direction from previous years. After a blast through Dyfnant forest, crews will return to the Rally Village in Deeside via what is certain to be a very popular tea-time stop-off right in the centre of historic Chester.

On Saturday, the Nationals will open the action at the family-friendly RallyFest at Cholmondeley Castle before tackling four classic forest stages in west Wales – Pantperthog, Dyfi, Gartheiniog and Aberhirnant. The crews will return to the Rally Village in the early evening where the Saturday night party will be getting underway.

Sunday’s schedule in north Wales will follow the main WRC programme with visits to Clocaenog, Alwen and the spectacular Brenig ‘Power Stage’ before the Ceremonial Finish in Llandudno. 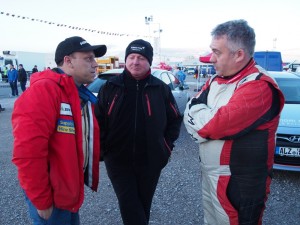 National competitors will once again be based alongside the WRC teams in the buzzing Deeside Rally Village, adding to the exciting atmosphere that brought 29,000 visitors to the free-of-charge attraction in 2015. They will also be invited share the WRC start ceremony at Parc Eirias stadium on Thursday afternoon.

“The National Rally’s popularity is a really important success story for this event,” said Ben Taylor, Managing Director of Wales Rally GB. “Enabling crews from all levels of the sport to be a proper part of the action underlines the fact that the country’s blue riband event is as much about UK rallying as it is about the WRC. It contributes massively to a real end-of-season party atmosphere for competitors, marshals, crews and fans – and with better weather booked for October half-term, this year is going to be a fantastic spectacle!”

Last year’s National rally was a complete sell-out with the first wave of guaranteed places filling up on the first day,and this year is expected to be similarly oversubscribed when entries, priced at £1000 + VAT, open on Wednesday 31 August. Entries to the National B status event can only be made online through the official walesrallygb.com website and must be accompanied by online payment in order to be registered. 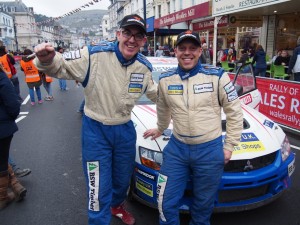 Scottish star Mike Faulkner and co-driver Peter Foy took the National honours in 2014 and 2015 – now they are gunning for a hat-trick in their Mitsubishi Lancer Evo 9.

“The last two years have been fantastic events for us,” admitted Faulkner. “We are really looking forward to defending our title and going for three-in-a-row in what is now an annual pilgrimage for many of the Scottish Rally Championship crews.

“The chance to tackle the iconic Welsh stages alongside the world’s best is brilliant. We feel very much part of the bigger event, carried along with the whole atmosphere – the buzz of the large crowds both on the stages and the service park is fantastic. The quality of the stages and the challenge over three days creates an exciting event that you can only get as part of Wales Rally GB.”

Details of the highly-praised Road to Wales initiative have been announced, too. Introduced in 2013, the scheme rewards the winners of the UK’s premier national championships with free entries into Wales Rally GB.

The prizes for the BTRDA and Scottish Championships will go to those crowned as 2016 champions, while the other two championships have created their own criteria. If the Welsh series hasn’t been decided after the Woodpecker Rally (3 October), the prize will go to the crew with the best five scores from the opening seven rounds. The NorthernIreland award will go to the junior championship leader after the Ulster Rally (20 September).

Tickets on sale
Tickets for October’s event are now on sale with significant discounts for those buying in advance. Adult ticket prices start at just £20 for the family-friendly RallyFest at Cholmondeley Castle, £25 for a day ticket or £99 for the full 4-day event pass. As this year’s rally falls in the October half-term, all children aged 15 and under go free!