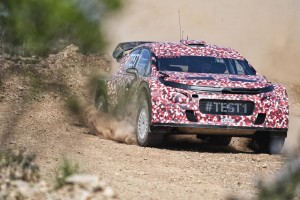 On schedule, Citroën Racing has completed initial testing of the car that will be entered by the brand in the World Rally Championship from next season. On the gravel roads around the Château de Lastours and then in Fontjoncouse, Kris Meeke has already tested the reliability and performances of this new generation model.

First and foremost, it is worth remembering what a 2017-spec World Rally Car actually is. Because compared with the models that first appeared in 2011 the change is set to be dramatic, for eyes and ears alike! 55mm wider, the bodywork enjoys great aerodynamic freedom, with a front bumper fitted with a splitter, prominent air inlets and outlets, a rear diffuser, and so on. It is no accident that comparisons have been made with the legendary Group B cars of the 1980s!

Under the bonnet, the 1.6-litre direct injection turbo engine is now fitted with a 36mm booster flange, like the Citroën C-Elysée WTCCs. With some 380bhp under the right-hand pedal, the drivers will be able to savour the power on offer, especially as the minimum regulatory weight has been reduced by 25kg and the four-wheel drive now comes with a central differential that improves traction…

You think that sounds exciting? Well, that’s hardly surprising! This new generation of World Rally Cars has been designed by FIA and the manufacturers to given the WRC new impetus. After announcing its return to the category in 2017, Citroën is now determined to play a full part in breathing new life into the WRC, with the aim of winning rallies and adding to its collection of world titles.

Just for the record, the very first outing of the brand’s latest model was held on Saturday, 9 April in Versailles on the small track right next to Citroën Racing’s Satory site. Alexandre Bengué, the team’s test driver, was handed the responsibility of completing the first few miles. The following Monday, Kris Meeke got behind the wheel of the prototype for another shakedown session. As he climbed out of the car at the end of his first run, the Northern Irishman’s wide grin spoke volumes about how much he had enjoyed driving the new car!

Overseen by Laurent Fregosi, Citroën Racing’s new Technical Director, the development team then headed for the south of France for the first proper test session. Engineers Alexis Avril (project manager) and Didier Clément (chief operations’ engineer) didn’t go for the easy option in choosing the roads around Château de Lastours and Fontjoncouse as the base for testing. Regularly used by cross-country rally vehicles, the rocky gravel roads provided a demanding environment in which to test the strength of the chassis, the suspension, the gearbox and the bodywork.

To hide the aerodynamic features as much as possible, Citroën Racing’s latest creation was decorated with a special “camouflage” livery, with a red, white and black pattern created by Citroën’s design office. At 9.12am on Thursday, 14 April, Kris Meeke and Paul Nagle began the test programme defined by the team. Although this moment represented an achievement of sorts for the engineers and technicians in charge of designing and building this first version, it also marked the start of a new adventure!

Without ever losing his broad smile, Kris Meeke switched between testing sessions and technical debriefings. Whilst racking up the miles to flush out the inevitable teething problems, he also tried hard to analyse the reactions of the car to changes in the set-up.

On the fourth day, Kris handed over driving responsibilities to Craig Breen. Tasked with analysing the work done using his own experience and feeling, the talented young Abu Dhabi Total WRT driver turned out to be just as enthusiastic about the potential and performances of this new generation World Rally Car!

Back in Versailles, the team now has to go through and analyse the gigabytes of data acquired and prepare the changes that will be made in time for the next test session. Where and when? Watch this space!

YVES MATTON: “THE TEAM HAS DONE A FANTASTIC JOB”

What do these initial test mean for the team?
“It is one of the major stages in a project of this size. The lead-times established for the design phase were very tight. Thanks to its expertise and experience, the team has done a fantastic job to design a car based on the new regulations. Having seen our World Rally Car begin road testing on schedule and complete runs without experiencing any major problems, we can take our time in confirming the upcoming milestones. Once again, what the men and women at Citroën Racing have achieved is quite exceptional.”

What are your impressions, having seen the car in action?
“It is very much in line with what we had imagined when we talked about the new regulations, which were devised to make the cars more spectacular. All the factors we had wanted to improve – the noise, impression of speed and aggressive design – are already in evidence, even though this was only the car’s very first test outing! I think rally fans are going to like the new generation of WRCs.”

It may not be one of the points that has been given the most attention, but these new cars are also safer…
“The FIA has been working on improving safety for a number of years and we are supportive of this approach. As far as we’re concerned, we have always been something of a pioneer in this field, even if it has meant imposing additional restrictions on ourselves. It will be no different with this car, which will be even safer than its predecessor.”

Does having competed in a track racing championship in the last few years represent an advantage or a disadvantage?
“We have never strayed far from the WRC and have been constantly updating our knowledge base. Our WTCC programme will be a bonus, because it will enable us to have a different approach. Before, we had virtually no real experience in aerodynamics. It is now a field in which we have genuine expertise. Similarly, we have an engine that has been running for more than two years with a similar power level and lifespan to those stipulated in the WRC specifications. All of this will be beneficial for the rest of the development phase and when it comes to running the car.”

What are the next key stages for the project?
“We are going to continue testing on gravel and then we’ll begin testing on tarmac. One of the key stages will be the point at which we set the technical definition to start building the cars that will be competing in 2017.” 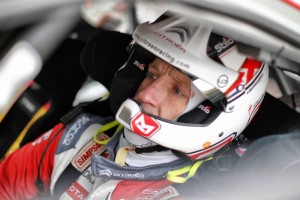 You are surrounded by a lot of people at this first test session, with several engineers and technicians working on the car…
“Yes, everyone is absolutely 100% committed and it’s fantastic! When I joined the Citroën Racing fold two years ago, the priority was the WTCC and the development of the WRC was fairly limited. Now, you can feel there’s a real energy, with engineers coming back to rally with experience they have gathered on the track. The Citroën Racing machine is up and running at full power and that motivates me to work even harder. Together, we can all do something really special in the future!”

How did your first outing in the car feel?
“It’s always exciting to drive a car for the first time. But this is different, this is the start of a major new programme for Citroën Racing and new era for the WRC. That’s what makes this moment so special. I know that everyone has put in a lot of work to build this new car. So it’s special for them too! Now, we’re moving into a new stage of the process and it’s up to me to step up to the plate.”

This new generation of cars have been frequently compared to the Group B cars. What do you think?
“Obviously, it’s a period of the history of rallying that everyone remembers with affection. The cars were spectacular, with their bold design and big spoilers. We’re returning to that spirit, with more aggressively-designed cars but adding in the technological advances that we now have in 2016. Having driven one or two Group B cars, I can confirm that there really is no comparison. The potential of our new World Rally Car is incredible!”

What did you feel when you started to push?
“With the power and the aerodynamic efficiency, these cars are fascinating. After my first run, one of the mechanics filmed the expression on my face. I didn’t realise it at the time, but the big smile on my face spoke volumes about how much I had enjoyed driving the new car!”

There are not many of you who are able to speak in practical terms about this increase in performance. Is it really a good thing for rallying?
“I’ve always thought that aerodynamics shouldn’t become too important, because rallying shouldn’t become like track racing. I think we have a good balance and these cars will be just as exciting to drive as to watch. But I think the human factor will become more important than it is currently. In my opinion, the 2017 WRCs must remain exclusive to the World Championship, like the F1 cars or the MotoGP bikes.”

These increased performances go hand in hand with improved safety…
“Every year, even if the regulations remain unchanged, we always go a little bit quicker. You can’t stop technology from moving on. This new generation will enable us to make a big step forward in terms of the safety of the cockpit and protection in the event of a side impact. We’re heading in the right direction.”

Let’s finish with the most important aspect: what was the feeling like on gravel?
“As soon as we set off, I felt that I was driving a genuine rallying machine, a well-designed car. I have been involved in the development of several cars in my time; generally speaking, you spend more time waiting around than driving in the first few test sessions. But with this, I was able to rack up the miles and start to explore the set-up options. It was like a dream!”