… Citroën Racing And Kris Meeke Set For New Challenges Together! … 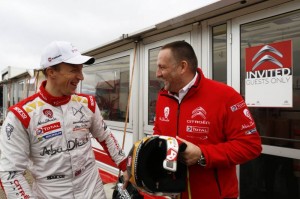 A month after it announced the launch of a new WRC programme to begin in 2017, Citroën Racing has confirmed that it will be continuing to work together with Kris Meeke for the next three years. In 2016, the British driver’s main task will be to work on development of the new World Rally Car designed by Citroën Racing.

Having joined the Citroën Total Abu Dhabi World Rally Team at the end of the 2013 season, Kris Meeke has established himself as one of the few drivers genuinely capable of troubling the dominant leaders of the World Rally Championship. Despite his relative inexperience – having only contested 34 WRC rallies by the end of this year – the Northern Irishman claimed his first win just a few months ago after a perfectly controlled performance at Rally Argentina.

Constantly progressing and still with plenty of room for improvement, Kris Meeke represents the first part of the plan put together by Citroën Racing for its return to top-level competition in 2017. After signing a contract that runs until the end of 2018, Kris Meeke and his co-driver Paul Nagle will be able to continue to flourish whilst taking on some ambitious new challenges.

“Various options were available to me to pursue my career, but I chose to stay with Citroën Racing to reap the rewards of the work done over the last two years or more,” commented Kris Meeke. “It’s also a way of thanking the team for the faith they have shown in me. We now know each other very well and this understanding will be essential in developing the new car successfully. I’m very excited about everything that lies ahead in the next few months.”

“I began my career in motorsport as a design engineer so although I can’t wait to get into the car, I’ll be following every stage of the design and assembly of the first car with great interest. I’m also very excited about the new FIA regulations, which look set to deliver more powerful and more spectacular cars! Obviously, all of this work is geared towards me being able to fight for more wins and for the world title. Citroën Racing is team with a winning mentality, with fifteen world titles, eight of which were won in the WRC. I am extremely pleased to be part of this new chapter in the history of such a prestigious Brand.”

“In terms of our new programme, above all else we wanted an experienced, top-level driver, with sound technical knowledge,” added Yves Matton, Citroën Racing Team Principal. “Kris was undoubtedly the best choice and we are delighted that he has decided to stay with us. We have a lot of shared history, with two seasons in the JWRC in the 2000s and then the last couple of years with the DS 3 WRC.

However, the most important part of his career is ahead of him, with three seasons to develop and achieve success in the successor to the Xsara, C4 and DS 3 WRC! In 2016, the test programme will be the priority for Kris from April, when initial testing of the new car is set to begin. He will nonetheless keep his hand in as regards racing by taking part in several rounds of the World Championship. Initial details of this private programme will be revealed shortly.”