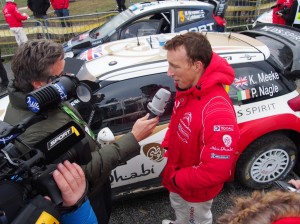 Earlier this season Kris Meeke became the first British driver to win a round of the FIA World Rally Championship since his mentor, Colin McRae, won the Safari Rally back in 2002.
As well as scoring his breakthrough victory in Argentina, the Citroën Total Abu Dhabi WRT team driver also has consistently taken the fight to the all-conquering Volkswagen Motorsport outfit on many other events during the 2015 campaign.
Now the 36-year-old from Dungannon in Northern Ireland is setting his sights on more success on home ground: Wales Rally GB (12-15 November). Meeke came close to finishing on the podium 12 months ago and says it would be even more special to post a great result in 2015 on the 20th anniversary of McRae winning the event in 1995 to become Britain’s first-ever World Rally Champion.

How much does it mean to you to compete at home in the World Rally Championship?
“A huge amount. It’s brilliant. It’s incredible to come to this event as a works driver. I got my first chance to do that in 2011, when I was driving for Mini. I came really close to a podium, but felt then that it was very, very special to be driving down these roads in one of the best World Rally Cars around.
My home is Northern Ireland and – for now – there’s no WRC round in my backyard, but Wales really does feel like home with all the support we get.”

What makes it special?
“It is the support you get. Loads of folk come over from Ireland and I’m lucky enough to have a few people out cheering me on in Wales from the mainland UK. Seeing those flags waving and hearing the crowds on the road section make it special and, of course, the roads. I love these roads – they’re definitely some of the best in the world. But it’s not just the roads, it’s everything that goes with them: the smell of the mud on the exhaust, the sight of the mist hanging over the hills in the morning – it’s a beautiful place to be, and the only place to be for a rally fan in November.”

What do you think it’s worth? Could you say it gives you an extra 10 brake horsepower?
“It’s not worth 10, but it gives you that extra bit of focus and determination. Some would say I don’t necessarily need that, but any sportsman will tell you driving or playing in front of your home crowd creates a very special atmosphere that you can feed off. There’s an electricity on this event that’s just not there on other rallies. You go to somewhere like Australia and there are five people standing around the service park and a handful in the stage, it’s just not the same.”

There were a few folk in Argentina watching you this year – that was a good event-
“Aye, it was. To get that first world championship win was really special for me, for Paul [Nagle, co-driver] and for the whole Citroen Total Abu Dhabi World Rally Team. It was a fantastic result and now we’re hungry for more of them.” 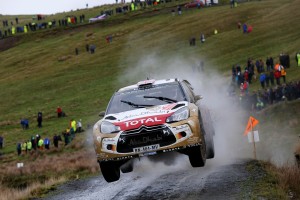 Could we see you taking a second win of the season in Wales?
“I would absolutely love to, of course I would. But we have to be realistic: I want to try to get on the podium. We know where we are and a podium would be a realistic target. To try and win it against these Volkswagen boys would be almost impossible, something would have to happen to them.”

It was looking good last year?
“We were running second, but then got caught out in the Brenig stage on the final morning. There’s a wee bit of unfinished business there… ”

This rally will always have some very special memories of Colin McRae and never more so than this season – 20 years on from his world championship. What do you remember from 1995?
“I would have been 14 or 15 or something. I wasn’t on the event, but I was running home from school to find out what was going on. I remember it so well, it was incredible to see what Colin did.”

Did you think you’d be driving a factory car on your home round of the WRC 20 years on?
“I have to say no. When we were in Spain on the last round, we drove up a road to one of the stages on the final day and I had a real flash back to 17 years ago, when I was walking up exactly that same road as a fan to watch Colin fighting with Richard Burns. And there I was driving a works Citroen up to the start of the stage 17 years on. It’s incredible.”

You knew Colin better than most – he was a special guy-
“He was. He really was. Everything’s been said in the past, but you know everybody took a step back when Colin was coming through – you knew it was going to be on the door handles and very, very spectacular. Colin’s style and commitment defined an era in the World Rally Championship and it’s right that we take a moment and remember what he did for the sport and for British rallying 20 years on.”

Fans wanting to see Meeke and the other WRC top guns in action in the legendary Welsh forests can take advantage of advance ticket prices that represent the cheapest way to see the action.

The four-day World Rally Pass is the all-inclusive ticket for fans. It provides access to all the individual Special Stages as well as Thursday’s pre-event Shakedown. It is priced at £99 for adults (or just £1 for accompanied children aged 9-15) and comes with a hard card pass and lanyard, plus an event programme valued at £9.

Forest Passes offer a similar level of flexibility as the World Rally Pass but just for an individual day of the event. Again they include an official programme and can be purchased in advance for just £25 – entry to a Single Stage on the day will cost £30.
Tickets for Saturday’s family-friendly RallyFest at Chirk Castle are available now for £25 with an even greater discount being offered to families.
Full ticket information can be found on the WalesRallyGB.com website.
For further updates, follow Wales Rally GB on Twitter @walesrallygb or join the conversations on Facebook at www.facebook.com/walesrallygb.