Scottish rally star John MacCrone will return to the FIA World Rally Championship on the ADAC Rallye Deutschland (20-23 August), thanks to an expanded partnership with Watermans Accident Claims and Care, one of Scotland’s leading personal injury firms.

The 25-year old Watermans road safety ambassador, who won his home Tour of Mull Rally in 2013, will drive a hired Ford Fiesta R2 in Germany. The normally-aspirated car will be prepared by the Polish PZ Services team and run on DMACK tyres.

Watermans’ decision to help MacCrone, a former FIA WRC Academy and MSA Team UK driver, make his return to the WRC may seem an unusual pairing, but underlines the Personal Injury firm’s commitment to promote road safety and safety within motor sport.

MacCrone will be co-driven by Dai Roberts. The experienced Welsh navigator has never contested Rally Germany before, but did partner MacCrone on the Manx National Rally last year. 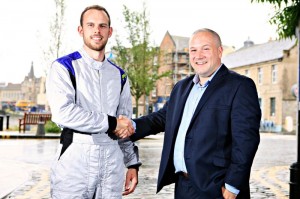 Scott Whyte, Managing Director of Watermans Accident Claims and Care, said: “We have a track record of backing young Scottish sporting talent and were really impressed by John’s determination to show what he can do at the top level in rallying. He put on a great display at the McRae Rally Challenge and also helped us to raise a lot of money for our charity partner, TCCL, at the same time. This represents the next step in what we hope will be a successful on-going partnership with John and Rally Team Scotland.”

“John will also be spearheading our campaign to promote road safety in Scotland, something that we are committed to in order to reduce the number of people and their families who become the innocent victims of tragic road accidents.”

John MacCrone said: “I’ve competed in Germany as part of the WRC Academy so have some knowledge of the event. The stages are tough and offer many different challenges all in the same rally – tight twisty vineyards, open fast German back roads, and the daunting Panzerplatte which is lined with the famous hinklesteins. Generally the roads are far smoother than on Mull and have more junctions, so it’s nothing like rallying at home at all. It will be really great to use the DMACK Trophy competitors as a benchmark. Even though they are in the new Fiesta R2 turbo cars, it will be interesting to see how close we can get. I have done 30 miles in a rally car since last October with no testing, so I think we have to be realistic with our hopes and aims. It’ll take a little time to get back into the swing of things but once we do we will aim to be as competitive as possible. It’s all thanks to Watermans that we are able to compete in Germany, and after our successful partnership at the McRae Rally Challenge at Knockhill, it’s great to have them back on board.”

Based in Trier, this year’s ADAC Rallye Deutschland is bigger than before, with 21 special stages totaling 232 miles. The three-day event takes place on various types of sealed-surface roads, with bumpy, narrow and switchback stages through the Mosel vineyards, fast and flowing roads through the Saarland countryside (which are treacherously slippery when wet) and abrasive concrete roads in the Baumholder military area. The latter is venue to the long and infamous Panzerplatte stage, parts of which are lined by concrete hinkelsteins kerbstones, which are designed to keep tanks from straying off the road, and are definitely to be avoided by Ford Fiesta drivers!