The latest motor sports star to sign up for the McRae Rally Challenge at Knockhill has never contested a rally in his life! He also claims never to have driven a ‘proper’ rally car, but he does have one rather important credential. He won the British Touring Car Championship motor racing crown in 2012.

‘Flash Gordon’ Shedden is one of the UK’s most popular and successful motor racing drivers and has been ‘talked into’ entering this unique event next month. Supported by Beatsons’ Building Supplies and EventScotland, this special two-day ‘McRae Rally Challenge’ event celebrating the 20th anniversary of Colin McRae’s World Rally Championship win has attracted world-wide interest.

The nickname ‘Flash’ comes from his weekend job, scorching round Britain’s top race tracks at the wheel of his Team Yuasa Honda Civic Type R in the televised, gladiatorial mayhem that is Britain’s top motor racing series. But during the week, life is conducted at a much slower pace as Head of Corporate Sales and Business Development at Scotland’s national motor sports centre.

Gordon is not anticipating a career change any time soon, but he said: “If ever I was going to do a rally, this is the one. This will be an iconic event for motor sports fans and it will be quite a challenge for me. I wouldn’t trust myself on a proper forest rally event – there are too many trees!”

Joining Gordon on his rallying debut will be World Rally Championship co-driver Stuart Louden. The Uddingston based co-driver who crews with rising Irish star driver Keith Cronin takes such challenges in his stride: “I’ve been in scarier positions with worse drivers,” he quipped, “Gordon knows where he’s going so that will help me out!” 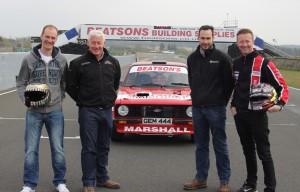 Gordon added: “Stuart’s just coming along to take selfies,” but when pushed, he responded: “We’re here mainly to have fun, we won’t be going out to win anything,” but there was a glint in his eye when he said it. When did you ever hear a racing driver say he wasn’t going out to win?

There was no real surprise when it was announced that Beatson’s Building Supplies would be sponsoring this rather special celebration. Managing Director John Marshall and his son Ross have always been fans of motor sport, particularly rallying.

“I’ve been competing for 15 years now,” said John, “and it all started here at Knockhill. I came up here to attend a corporate day, and I was hooked from that moment on. I started racing in the Ford Fiesta XR 2 series and then the MINI Challenge, but one of the rounds of the MINI series was the Jim Clark Rally. That was such a thrill that I switched from racing to rallying.”

He added: “Colin (McRae) was an inspiration and a hero, so it’s good to put something back into the sport and Beatsons are proud to be a part of that.”

It was a point echoed by his son Ross: “Rallying provides a complete break from the pressure of running a company like Beatsons’ Building Supplies. We are one of Scotland’s top construction supplies businesses and always aiming to be the best. Coincidentally, many of our trade customers are interested in motor sport too so the motor sport connection is good for business.”

Both John and Ross are highly successful drivers in their own right and they will be joined by John’s brother Robert Marshall who is coming out of ‘rally retirement’ to compete in this unique event too.

All three drivers will be competing in ‘current generation’ Ford Escort Mk2 cars while Gordon Shedden will be competing in a ‘Historic’ period specification Mk2 Escort which will lack some of the sophistication of the other Marshall cars: “They will have modern 6 speed, flat-shift, two-pedal (clutchless) transmissions, just like my Honda Civic race car, whereas I will have a rally car with an ‘H’ pattern manual gearbox – I’ll have to learn to drive all over again!” said Gordon.

Over on the other side of the world a rather different celebration took place over the weekend when Northern Ireland’s Kris Meeke scored his first ever victory on an FIA World Rally Championship event. He and Irish co-driver Paul Nagle won the XION Rally Argentina (23-26April) in their Citroen DS3 beating the best that the world of rallying has to offer.

Colin McRae spotted Meeke’s potential very early in the Dungannon man’s career and helped him throughout his difficult early days of trying to get established in this fiercely competitive sport. When Meeke first moved over to the UK he stayed with Colin McRae at the family home in Lanark who continued to support him through his first foray into the International Rally Challenge and the Junior World Rally Championship.

When he climbed on to the roof of his Citroen car in Argentina yesterday at the end of one of the toughest rallies of his career, Meeke said: “This one’s for Colin.”