Compiled and written by Ashleigh Morris …

Round One: Grant Construction Knockhill Stages
The season got off to a great start for Stuart Baillie, who took the victory at the Knockhill Stages. It was an unbelievably close battle, with Baillie and Lee Hastings finishing the rally with identical times. However, due to setting a quicker time on the first stage, Baillie and co-driver Alan Cowan took the win in their Subaru Impreza.

Round Five: Glenrothes Motorsports Club Crail Summer Stages
STRC competitors Bruce Edwards and Jim Smith won at Crail, followed by Stuart Baillie and Lachlan Cowan in second, and Alan Gardiner and Robin Nicholson in third. Last year’s winners Alastair and Colin Inglis crashed out on stage three and championship leaders Ian and Kathryn Forgan suffered a bad accident on the second stage but managed to maintain their championship lead. Steven Hay moved up to second in the drivers’ standings, nine points behind Forgan.

Round Seven: Solway Coast Rally
Mark McCulloch and Elliott Edmondson took the win at the Solway Coast, with Stuart Baillie the highest placed STRC competitor in fifth. Ian and Kathryn Forgan were back out in their Ford Ka and finished ninth overall, while Scott and Adam Russell took tenth. Ian Forgan maintained the championship lead, with Steven Hay in second, Scott Russell third, Stuart Baillie fourth and Craig Gibson fifth.

Round Nine: Tunnock’s Mull Rally
Victory in Mull went to John MacCrone and Stuart Loudon. Lee Hastings and Brian Findon had a good result which moved Hastings up to third in the drivers’ championship and Findon to fourth in the navigators’ standings. Heading into the final round of the championship Ian Forgan led the STRC drivers’ standings by nine points from Steven Hay, with Lee Hastings in third, and Stuart Baillie and Craig Gibson tied in fourth. 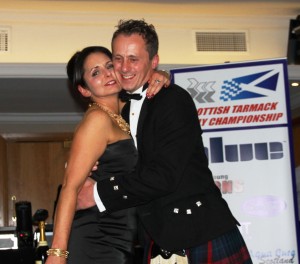 Class 1: Steven Hay
As well as winning Class 1, Steven won the STRC Junior Championship and was second overall in the championship standings. “Since it was my first season I was aiming to finish in the top three in class so I’m really pleased to have won my class and finished second overall,” said Steven.

Class 2: Craig Gibson
Craig Gibson had a consistent season, finishing every rally he entered which secured him fourth place in the championship. He said: “Fourth overall was great for our first full season competing. Next year we’ll be competing in class 3 – Knockhill will be the first event for the new car. I’m looking forward to the new venue at Machrihanish.

Class 3: Ian Forgan
Ian took the championship lead after round three at Ingliston. Despite a bad accident at Crail in June he maintained the lead for the rest of the season and returned to the venue to wrap up the championship at the Kingdom Stages in November. Ian commented: “I’m over the moon. After the accident I thought that was the end of the championship. We worked hard to rebuild the car and this is a fantastic reward for all the hard work.”

Class 4: Kieran O’Kane
After achieving consistently strong results throughout the season Kieran finished seventh in the championship and won class 4 by 42 points. He said: “I’m really chuffed with the class win. We’re rebuilding the car for next year so I’m going to give the championship a good go and hopefully we’ll get to do the rounds we missed this year.”

Class 5: Stuart Baillie
Stuart won the first round at Knockhill and had consistently good results throughout the season, finishing with second place at Crail, adding: “I’m chuffed to bits with how the car has come on and how we performed all year. The team have done a great job and the car has been really reliable.”

We are pleased to announce that the Scottish Tarmack Rally Championship has extended its partnership with Blue, who will remain title sponsor of the championship for the 2014 season. Blue is a provider of materials processing equipment for the quarrying and waste recycling industries.

We would like to take this opportunity to thank Blue for their continued support and we look forward to another successful year of the Blue Scottish Tarmack Rally Championship in 2014. We would also like to thank all the sponsors, marshals, organisers and competitors involved in the championship.

For more information on the Blue Scottish Tarmack Rally Championship or to enter the 2014 Championship visit: www.dunfermlinecarclub.co.uk

More information on Blue is available from: www.bluegroup.co.uk