The presentation of awards to the winners in the 2013 Brick & Steel Junior 1000 Ecosse Challenge took place in Glasgow on Saturday 30th November 2013. 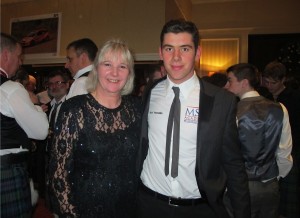 The Lady and the Champ

Champion Driver for the second year was Alexander Vassallo from Corebridge in Northumberland. But there was a twist to the presentation to Alexander. Not only is he a very fine young rally driver, but he also excels at rugby and he had to decide between the afternoon awards presentation in Glasgow or playing for his school in a critical away game in York.

The situation was resolved when the Junior 1000 Ecosse Challenge organisers agreed with the ARR Craib Scottish Rally Championship that Alexander’s presentation could take place later in the evening as part of the SRC awards presentation. And so Alexander was presented with the distinctive Knockhill ‘J’ carved wooden trophy by Britain’s first World Rally Champion – Louise Aitken Walker MBE.

Alexander commented: “I’ve enjoyed this season just as much as 2012. Coming away with the Championship again is an excellent feeling. I have to give full credit to all the Junior drivers this year, they have certainly raised their game, making for a more closely fought Championship in comparison to last year. Can’t wait to see how next year is going to come together. With everyone improving at the current rate, it indicates that it will be a good year with some good fights! Bring on 2014!”

Prior to that, the recently crowned BTRDA Gold Star Champion, Euan Thorburn, presented the rest of the main awards in the afternoon as planned. 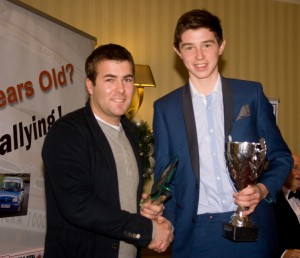 Second overall Junior Driver was Ben Crealey who travelled over by ferry from N Ireland in the morning and was heading back home with his delighted family right after the presentation. Ben also collected the Pearson of Duns Cup for finishing the season as First Nissan driver. Ben’s talents have now been recognised at the highest level and he has been awarded a place on the MSA Academy for 2014.

The top two positions may have been taken by ‘non Scottish’ crews, but standing proud and upholding Scottish honours in third place was Michael Dickie from Banchory. This was a very satisfying moment for Mikey’s family and supporters and the organisers of the Championship as Mikey was the very first to step forward to sign up for the Championship when it was announced in 2010. He was 12 at the time! 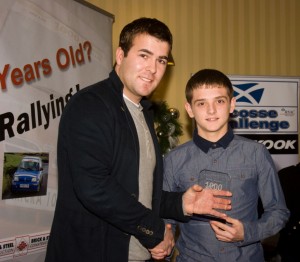 Dylan O’Donnell received the First Newcomer award. He finished 5th in the Championship in his ‘rookie’ year and impressed everybody with his driving skills and terrific attitude. Dylan may be our smallest driver in terms of stature but his achievements behind the wheel rank him amongst the best. 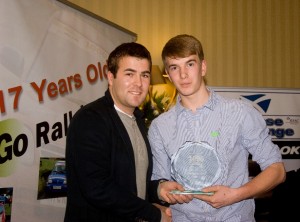 The ‘Spirit of the Championship’ award went to Alasdair Currie from Mull. Like Ben Crealey from N Ireland, Ally had to spend a large element of his budget on ferries, but he achieved considerable success and admiration from his fellow competitors for his commitment and driving skills behind the wheel of his ageing Citroen AX rally car.

Some competitors will now pack up their Junior equipment and move into the senior league because they have reached the ripe old age of 17. But the rest will be busy sorting out cars and budgets for the 2014 season which will start again at the end of March. Several new faces will join the returning crews from 2013.