You are here: Home » Rally Reports » 04 Nov: Juniors in Wales

Crealey On Top After Trip To Anglesey … 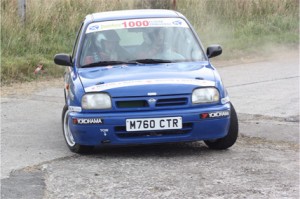 Ben and Liam in Wales

Ben Crealey in his Nissan Micra took the top Brick & Steel Junior 1000 Ecosse Challenge spot on Anglesey last weekend on the Pentreath Kia Glyn Memorial Junior Stages. In doing so he secured the runner up driver position in the 2013 Brick & Steel Junior 1000 Ecosse Challenge and co-driver Liam Regan took the top co-driver spot. There was a tie for the top co-driver between Regan and Euan Duncan, but Regan took the position when the tie breaker was applied.

Finishing second Junior 1000 Ecosse Challenger on Anglesey was Mikey Dickie (Toyota Aygo) – Euan Duncan’s driver. But he had to fight all the way with an inspired Harry Marchbank/Jordan Black (Nissan Micra) who never gave up the fight until it was all over. That means Mikey has taken third Junior Driver in the Championship for 2013.

Seven Junior 1000 Ecosse Challenge crews travelled down to Anglesey to join fourteen other Junior crews from the F1000 Junior 1000 Championship across the UK for this big adventure. There were several firsts for the Ecosse Challenge crews – the rally was over two days, there was more than 60 miles of competition and two of the stages were run in pitch darkness. Add in the gale force winds and torrential rain on Saturday and you have what could be called a real challenge.

All 7 crews got round to the finish with only one serious encounter with the scenery adding some more body panel damage to one poor wee Micra which was already displaying several battle scars. But Dale Kelly/Pete Weall (and Dale’s Mum and Dad and several other members of other teams who mucked in to tape the car back together) are made of strong stuff and they battled on to the end.

Late on Sunday afternoon, seven weary but very happy crews packed up their equipment and headed home to reflect on the final event of what had been a brilliant second season for the Brick & Steel Junior 1000 Ecosse Challenge – and to prepare for the final get together at the Annual Prize Giving in Glasgow on 30th November 2013.

Report and Results from: David Barlow.