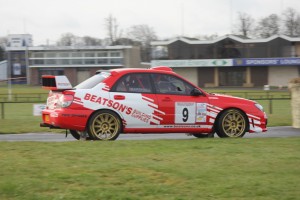 There were 8 Special Stages on this year’s Blackwood Plant Hire DCC Stages Rally and 7 seconds separated the winners from the runners-up. John Marshall and Scott Crawford came from behind to win the event from Gary and Gordon Adam who tied with Alistair and Colin Inglis for second place. How close was that?

It was a bit smirry in the morning which meant the Ingliston tarmac was damp and greasy as the cars nosed out of service heading to the rally start but the predicted rain held off almost until the close of play. That no doubt helped Gary Adam who opened the scoring with wets on the front of his Escort Mk2, visibly quicker than those around him. But halfway round the second stage, Gary realised conditions were improving and the tyres were starting to go off. “I’m losing grip at the front,” he said to co-driving Dad Gordon who responded:”Well, slow doon a bit,” and of course he didn’t!

Despite a cautious start in his new Subaru, John Marshall was slow-ish on the first stage, but took 26 seconds out of his first stage time on the second run to take second place behind the Adam family.

Bruce Edwards was kicking himself after the first two tests: “I started the day on old tyres when I should have put new ones on,” said the Darrian pilot, “but there’s no point now, the weather’s dry and they’ve started working!” Even so he was third quickest ahead of the Lotus Exige of Alistair Inglis who survived a ‘straight-on with cold tyres’ on the first test and then survived a huge spin in the second test, jus missing a large tree in the process.

Barry Renwick started quickly too and he was fourth quickest on the opening stage but failed to complete Stage 2: “Everything was fine as he we drove into service,” said Barry, “then it started up for the second stage and we drove to the Start where it cut out, and simply refused to fire up again.” The car was pushed back to service where the lads first checked the battery and then started on the wiring. It’s just a good job Roy Millington and any Proton staff were not within earshot – Barry Renwick is a nice, gentle, well mannered soul, but he can’t half cuss when he’s annoyed and frustrated. I had to cover my ears.

Nigel Feeney wasn’t far off the pace either in his new Subaru but the star of the rally was already making his presence felt. Sean Robson’s Citroen C2R2 was going like a demented wee moose with a squib up its backside round the tight confines of Ingliston and was sixth overall after the first two stages. Naturally some of the ‘auld gits’ gathered along the ‘spectating rail’ were predicting that he would slip back once conditions started drying out!

Andrew Gallacher was another early retirement, the Lancer spluttering to a halt in SS2. At least this time they finally found the cause of the misfire which has plagued the Mitsubishi on recent outings. The foam filling inside the bag tank was disintegrating and packing round the filter inside the tank disrupting fuel flow. 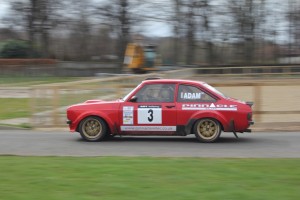 And yes, it was much drier for Stages 3 and 4 and with a change of rubber, Gary Adam was scorching round in fine style with Bruce Edwards hanging on to his tail, just like the witch in Tam O’Shanter. Inglis was still third with Marshall failing to improve after a half spin on the third test. A couple of good runs from Nigel Feeney saw him close the gap on the leaders and ended up fifth equal with Marshall after 4 stages.

Sure enough, the bigger cars were getting the power down a bit better in improving conditions with Hamish Kinloch displacing Robson for sixth place but there was only ONE second in it. Neil Thompson also poked his nose into this fight, the 1600 Corsa just 7 seconds behind the 1600 Citroen. Game on. Not for Reay MacKay though. The Subaru limped out of the 4th test with front wheel drive only after a driveshaft broke. 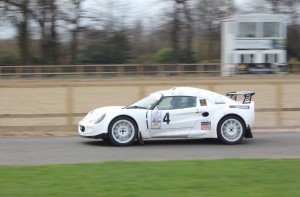 Alistair Inglis obviously had a good lunch, he was quickest over Stages 5 and 6, but more importantly John Marshall took time out of rally leader, Gary Adam. Bruce Edwards was second quickest on the fifth test but crucially lost around 20 seconds on the sixth: “We had a straight-on,” said Bruce, “Ashleigh called it, but the thing was not for stopping! I thought I had made an inspired tyre choice – it was disaster.” The Darrian smacked the ornamental bridge in the process but seemed to be mechanically okay after it. Hamish Kinloch was another to make a wee mistake, sixth quickest on the fifth test, he dropped 12 seconds and a place to Robson on the sixth stage, but Robson was more concerned about Thompson’s pace. Neil was 2 seconds quicker than Sean on the fifth and then Sean went 2 seconds quicker on the sixth.

Edward Todd failed to make the start of Stage 6 after clutch problems finally curtailed his outing after a busy day spent repairing two engine mounts and one gearbox mount in the Vauxhall engined GTM and Ray MacKay was finally forced out when the Subaru broke another driveshaft and the team had no more spares.

Despite a software glitch in his Subaru’s gearshift, especially with second gear, Nigel Feeney was well into the top six when the car spluttered to a halt mid SS6 with a fuel feed problem, and that was his run over for the day. Nigel Atkinson also made the start of SS6, but not the finish, a broken diff dropping the Evo9 out of the top ten after a good run.

By this time, the skies were darkening, with a few spots of rain falling during SS7 turning to rain for the final run of the day. Even so, John Marshall setting a sizzling time on the 7th stage, 16 seconds quicker than Adam. That reduced Adam’s rally lead to 2 seconds with one wet 8 mile stage to go. Along with the dampness, the temperature had dropped leaving Gary puzzling over tyre choice.

Even so, there was no stopping Marshall, another fastest time by 9 seconds earned him victory by 7 seconds. Second fastest times on both stages 7 and 8 also saw Alistair Inglis close the gap on Adam but it wasn’t quite enough and he tied for runner-up position with Gary getting it courtesy of his fastest time on the opening stage of the day.

That ensured Bruce Edwards held on to fourth, only 23 seconds adrift. In fifth place was Robson. The wee Citroen had taken 2 seconds out of Kinloch’s Honda engined Mk2 and although Hamish took back 4 seconds on the final run, he had to settle for sixth place overall, 16 seconds behind Sean – but only after another tie-decider had to be applied. Neil Thompson had taken 7 seconds out of Hamish on the 7th test, but Hamish took 8 back on the final run of the day to tie with the Corsa driver with the tie-decider again giving the position to the Escort man.

Seven seconds behind those two was Ian Paterson in the Subaru, having earlier survived a ‘straight-on’ in the fourth test, with Gareth White in the Peugeot 208 R2 finishing ninth after smacking a bale in SS4 and using the lunch break to repair the front n/s bodywork. Rounding off the top ten was the Evo6 of Alan Wallace.

Fourth time out in his new TEG Sport built Subaru, John Marshall was mighty chuffed with his victory, but he had to fight every inch of the way with the equally determined Adam and Inglis on his tail, but the stars of the day for me were the 1600 runners with three of them in the top ten, Robson, Thompson and White.