Bennett Does the Double …

The fourth and fifth rounds of the 2015 Brick & Steel Junior 1000 Ecosse Challenge took place at Kames Motorsport Complex in East Ayrshire on 4th/5th July. The very popular rally Championship which introduces 14 to 17 year old drivers to motorsport attracted 14 crews with representatives from Scotland, England, Ireland and Italy. Yes Italy – Umberto Accornero and his team came along to sample Junior rallying in Scotland. Four crews and their families/supporters were driving on a rally for the very first time. 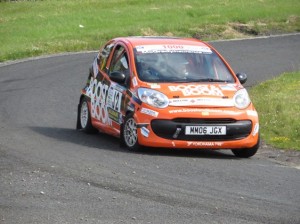 The star of the weekend was Peter Bennett from Laighgall in N Ireland with Arthur Kierans codriving in a Citroen C1. The team made the decision to commit to a full Scottish season and travel back and forth for all 8 events. But things did not start well with a non finish on Round 1 and a second place on round 2. But Bennett put that right with two solid first places at Kames. He took the lead from current Championship leader Finlay Retson on stage 7 out of 16 on Day 1 and then led all the way to stage 14 on Day 2. This moves him up to 4th place in the Championship. Bennett commented: “Kames suits my kind of attacking driving and car and I really like the venue. Very happy to be back on track!!”

Finlay Retson/Andrew Falconer in another Citroen C1 came to the weekend with victories from the first 2 rounds but once Bennett got into his rhythm they struggled to get back on terms and dropped a couple of seconds here and a couple of seconds there to end up 16 seconds behind and in second place overall for day 1.

Third place overall went to Ewan Tindall/Paul Hudson in another Citroen C1. Ewan did not really put a foot wrong all day and inherited third place when Brodie Balfour/Stuart Baillie slid off into the gravel and bogged down on SS9 dropping over 2 minutes and losing out on third place. This was a brilliant result for the young driver from Ryton in Tyne and Wear on his third rally.

Myles Reid and Ian Rae finished fourth in their Peugeot 107 ahead of Harry Chalmers and Lisa Watson with Harry saying: “The first 3 stages were rubbish. I just wasn’t organised enough and then we rumbled over a lorry tyre on the final stage.” Rounding off the top six were Umberto Accornero and Robert Gilham on their first visit to Scotland. 17 year old Umberto needed to finish both events in order to get signatures to qualify for his National licence – as he had an entry in for the following weekend’s Greystoke Stages! 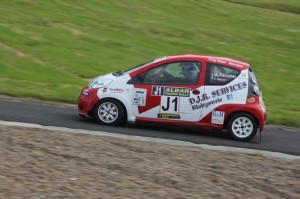 Day 2 started with much of the same and in Retson’s efforts to stop Bennett building up too much of a lead, he made a mistake on the 8th of 14 stages, outbraking himself, shooting off the road and breaking the accelerator pedal. He lost about 4 minutes getting recovered and slid down the order to finish the day in 10th place. But he still retains his lead in the Championship. Retson commented: “I like the smooth fast stuff and that is not what Kames is about. So we tried but could not really match Peter’s pace. Next event will suit my driving more.”

Harry Chalmers took up the chase in his Micra but had to keep an eye on the rear vision mirror as Brodie Balfour’s Toyota Aygo was an ever present threat, the two finishing 6 seconds apart at the finish. That gap might have been tighter but for a broken driveshaft in the Aygo: “That’s two in two days,” said Brodie.

A further six seconds behind was Umberto Accornero who had to temper speed with caution. He needed another finish today to ensure he had six signatures for his senior licence! Myles Reid was fifth in His Peugeot with Josh Hislop rounding off the top six in another 107, an excellent result on his first time out. Dale Kelly finished a relieved seventh in the Micra: “Two rallies – and no smashes!” hence the big smiles.

Ross Fernie won Sunday’s senior event in his Subaru Impreza from Graham Bruce in his Evo4. Stephen McClory was third in his Fiesta after a cautious start since his last outing was the Solway Coast last year. Lindsay Taylor was happy enough with fourth in the 205 while Gordon Winning and Niall Thomson both los time with broken driveshafts.

LATEST NEWS: As for young Umberto, he got his licence and he got a start on the Greystoke Stages the following weekend in a Major Motorsport Ford Fiesta R2. On his first ever proper forest stage rally he finished 58th overall and 8th in class, but had it not been for a couple of wee offs on the first two stages, he might well have finished inside the top 50. Now he’s off back to Italy for the summer holidays but he’s hoping to be back next year to contest the BRC!