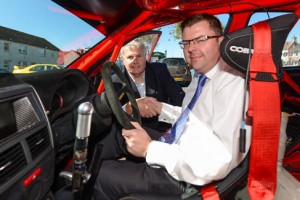 High-octane motorsport and the literary arts do not necessarily go hand in hand but next month Wigtown will play host to the GWF Energy Merrick Stages Rally and the renowned Wigtown Book Festival.

Both are supported by Dumfries & Galloway Council under its Major Festivals and Events Strategy, 2014-2017.

Despite tough financial conditions, the local authority has prioritised investment in major events to generate economic benefits and to bring cultural and sporting drama to the region.

On Saturday, September 6th, the Merrick Stages will see drivers and co-drivers from across the country battling for honours in the ARR Craib MSA Scottish Rally Championship, the Ecosse Challenge, and the Five of Clubs Championship.

The rally will again be based at the former county buildings, which provide the perfect backdrop for the Friday night scrutineering, and the start/finish the following day.

The route will comprise seven classic stages in the Galloway Forest Park, including those at Drumjohn, Auchinleck, Balloch and Arroch Hill.

From September 26th, Scotland’s National Book Town will welcome a world-class line-up of writers and broadcasters, including Clare Balding, Kate Adie, Margaret Drabble, Jonathan Miller and Kirsty Wark. Founded in 1999, the Wigtown Book Festival will this year comprise 175 events and activities for all ages.

The award-winning festival, which runs until October 5th, has become one of the UK’s best-loved literary events, with music, theatre, food and visual arts all added to the mix.

The book festival and the rally have become mainstays of the area’s diverse economy, attracting thousands of visitors.

At a launch ceremony in the town today

Said Merrick Stages Clerk of the Course, Graham Bisset: “We are delighted to have secured backing from Dumfries and Galloway Council of £10,000, which recognises the rally’s significance and contribution as a major event within the region. We look forward to increasing collaboration to develop the event and motorsport within the region in conjunction with the Council and the people of Galloway”.

He went on: “The warm welcome we get every year from Wigtown adds to the spirit of the rally. We’ve also got the benefit of the beautiful setting of the restored county buildings, the bowling green opposite, and the town square, all of which help characterise the event”.