You are here: Home » Rally News » 25 May: Dundrennan Test Day 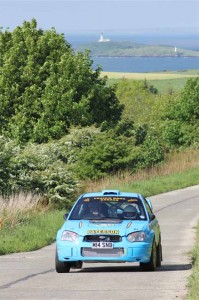 Solway Car Club ran an extremely successful Rally Car Test Day at Dundrennan yesterday where 18 cars and drivers turned up for a bit of a thrash. Since last year’s event, the club stalwarts have put in a lot of work, including building a brand new stretch of tarmac road at the MOD site to create more route possibilities.

That means when the Junior Rally returns here in August the youngsters will have even more variety to play with. In fact this event is currently the favourite on the Junior calendar because it gives them a genuine taste of a multi-stage rally – without having to use any public road sections.

Your intrepid reporter managed to cadge a lift with young Scott Peacock for a tour of the stage yesterday and the ongoing work to extend the availability of roads and changes of route. Normally I wouldn’t have accepted such an invitation, but since Scott was driving his Mum’s Tiguan with electronic handbrake, instead of his own Challenge spec Peugeot 205, then I could rest assured and safe in the knowledge that there would be no handbrake turns and no assaults on the hedgerows. Indeed at one tight right hander which rather defeated the lock on the VW’s steering, Scott backed up to take a second cut rather than risk running a wheel over the grass because “it looked quite guttery and I’d better no’ get any marks or dirt on the car!” Yes indeed, perfect chauffeuring as befits a person of my age and position, and perfectly safe.

Apart from the stretches of new tarmac already laid, the club has also been digging the foundations for more new roads and links. This means that rally routes will be able to be changed very quickly in future. For instance, they will minimise the need for installing hay bale chicanes by building half loops into existing roads round which to re-route cars. A bit like hiding code boards on the far side of triangle junctions if you see what I mean.

Whatever, all very impressive. And it wasn’t just me who was impressed, they had ‘royalty’ in attendance. Allan Dean Lewis from the MSA (Head of External Affairs and responsible for the training of motor sport officials, including the co-ordinating and development of training programmes and the delivery of specialist seminars) dropped in for a visit to see how the club was progressing. In all fairness to the MSA they have been supporting the club’s efforts to improve facilities and have provided financial grants and advice, and he was suitably impressed with all the hard work club members and friends have been doing.

Now I’m not suggesting for a minute that the club would have diverted such funds towards other educational pursuits such as club visits to lap dancing bars, big Stewart’s 65th birthday celebrations or Sanny’s rest and retirement fund, but given the limited funds the club has had at its disposal what they have achieved is immense, and well worth a look by other clubs.

It might also inspire our leaders to enter into a dialogue and work more closely with private landowners, the MOD and the Forestry Commission to encourage them to collaborate with local car clubs to create suitable venues for beginners and newcomers, as well as provide permanent facilities for experienced drivers and event organisers.

Take Richard Dickson for instance. He did 51 miles in total yesterday allowing him to try out different settings on the Subaru ahead of the Solway Coast Rally and use up old tyres.

Hamish Kinloch used the opportunity to try out tyres: “I’ve got a set of Kumhos which are half worn from last year’s Jim Clark,“ said Jim, “and I want to use the ‘other half’ next weekend.” Jim has also found a wee bit more power from the bog standard Honda S2000 engine in his MkII. “I spoke to one of the engine tuners in the BTCC,” said Jim, “and he gave me some tips. I had made my own exhaust manifold to fit the Escort, but he suggested I shorten the 4 header pipes, lengthen the two downpipes and increase the diameter. That released another 6 bhp.”

The McDowall family were in attendance with the Magic Bus dispensing tea and coffee to anyone within loitering distance, but Jim has a wee problem with the Focus that Jamie and Charlotte were driving. This is an ex-M-Sport recce car. Six were built and some f them were diesels, but the one he got has also done some work in Italy. Anyway, because it was properly built in the first place there some parts on the car which are not standard, including the hubs. The bottom balljoint is rattling on the front o/s hub and although it’s perfectly safe Jim is struggling to find parts. Anyway he’s had a chat with Arthur Gallacher at M-Sport who said he’ll “have a look and see what he can do”. Isn’t it nice to have friends in high places.

Rory Young was another at the test day spending the morning giving his Lancer a run before leaving at mid day to go and cut silage in the afternoon. The car had an engine problem on the Granite and it turned out it was the cylinder head so was keen to give the rebuilt engine a run out ahead of the Jim Clark.

Stuart Paterson let it slip that he’d bought 8 new tyres for the Jim Clark: “It’s the first time I’ve EVER bought ne tyres for the rally car,” he admitted.

Iain Wilson has completely rewired the Nova and rebuilt the gearbox. He’s also got new seats and tidied up the interior so he was getting familiar with the car again at Dundrennan: “I was also trying out left foot braking for the first time,” he said, “it’s good, it’s really good, but when you get carried away at times and start carrying a bit too much speed you have to think twice about where you’re putting your feet! Today was all about finding limits and then how you cope with it when you do!”

Mark McCulloch was complaining at the Border and Granite about the Subaru being down on power but has since found the cause: “I originally thought the turbo was on its way out. It’s over 18 months old but it turns out it was the manifold that was cracked.” Iain MacLeod was working with him and noticed that: “Mark does it right. When he was testing at the shakedown ahead of the Granite he was taking notes after every adjustment and he’s doing it right again. Makes some changes, does a run then takes notes.”

Jim Sharp has reverted back to Reiger suspension and was giving the Lancer a birl at Dundrennan. He’s also bought another GrpN Lancer “for the woods” just to save him swapping suspension and brakes back and forwards!

Another new car was in the hands of Lee Hastings. He has bought Jim Sharp’s Subaru Impreza and gave it its first run out here. It’s a lot quicker than his old one and he set about exploring (and going beyond twice) its limits. “I was building a new tarmac car,” said Lee, “But I bought this so we’re converting the one in build to gravel and it will replace the old car.” 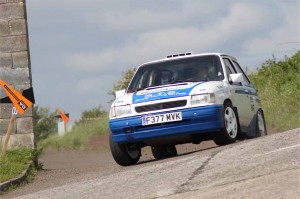 Wullie Paul gave his left hooker Nova an airing. The standard 8 valve 1400cc lump and standard gearbox have all been rebuilt so this proved an ideal venue to try it all out.

Steve Retchless was there too with his MkII. “It’s worth the 150 mile trip to get here just for these roads, they’ve got everything,” said Steve, “I’ve fitted a new rear axle and wanted to try it out ahead of the Midland Rally on the 20th. I was happy with it after the first stage – the rest was just for seat time!”

It was also good to see David Hardie and John McCulloch back in harness after their big shunt on the Solway Coast last year, when the blue Subaru had an intimate encounter with a stout tree. David already had a new shell in build so has spent the past few months building it up. The result is a treat for the eyes, but as the duo sat on the start line of their first run, David looked at John and asked: “Do you think we should be doing this? Do you think we should just sell it now before we get it dirty?” 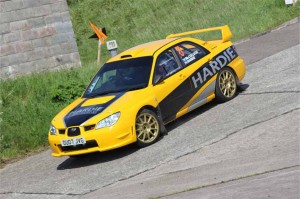 By the time they had two runs under their belts, the confidence was returning and the butterflies had gone. More importantly the times were falling, so the Jim Clark is looking like their first competitive outing this year.

But there was one unkind thought espoused by an onlooker. In last year’s accident, John’s crutch straps had done their job effectively, but left him sore and heavily bruised for weeks, especially the most tender bits – both of them. In fact he walked like John Wayne wearing seriously jaggy tweed troosers with a severial dose of Jock itch for weeks after it. Anyway this anonymous observer offered up the gem: “I wonder if John’s still got the balls for this?”

Now I know I shouldn’t but I couldn’t help myself I thought it was funny, just don’t tell Johnny Mac.