With the pre-rally route recce ahead of this year’s Jim Clark Rally due to start on Sunday 25th May why not make a weekend of it, and do a bit of testing ahead of the biggest event in Scottish rallying.

There are two options open to would-be competitors, or indeed anyone who has a rally car and wants to do some test and development work, determine a suitable set up or just blow the cobwebs out of the cylinder head, then either of these events will do the trick.

Both events are tarmagicadamly suitable for some serious setting up, and good crack on the day. 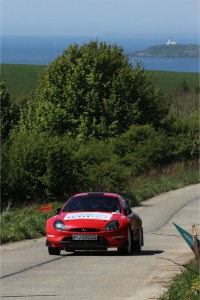 Following on from the success of previous events, Solway Car Club are organising another of their Special Stage Practice days on the Military Ranges at Dundrennan near Kirkcudbright on the 24th of May 2014.

Participants will be required to be members of the organising club, or a member of a Club in the Scottish Association of Car Clubs or the Association of North East and Cumbria Car Clubs, and will require to be holders of a minimum Stage Rally National B status licence which must be produced at signing-on.

The practice stage will be approximately 4 miles long on sealed surface roads, and will be open from 11.00am to 5.00pm. There will be no official timing and no results, although there will be a bogey time set at a 65mph average as per Blue Book regulation R28.2.2.

Entry fee is £125.00 and all vehicles will be scrutineered prior to taking part. It’s also worth pointing out that no in-car cameras will be allowed as this is a designated Security Restricted Area – and you don’t want to know the penalty for contravention of this rule. It’s the MOD we’re dealing with here!

Also on the 24th of May, John Parker Associates intend to run a full tarmac rally car test on the Rest and Be Thankful, just to the north west of Arrochar. The old road has been rebuilt and resurfaced and is 4.2kms long.

The test will run up hill (only) with cars starting on 1 min intervals, there will be a limit of 20 cars allowed, but an unlimited number of runs. If you are planning to compete on the Jim Clark rally, or the Jim Clark Reivers rally it will provide a perfect shake down, just one week before, but it is in no way limited to those crews, it will be strictly first come, first served.

For more info, contact John Parker at: jparally@gmail.com
Or, Brian Kinghorn at: bkinghorn@sprite5.co.uk