20 Questions with: Euan Thorburn …
Euan Thorburn is one of Scotland’s top rally drivers and won his first major title last year, the English/Welsh based BTRDA Rally Championship. In doing so he has become the only Scot to win the Gold Star series award in this national championship’s 60 year history (although Allan McDowall won the Silver Star series in 2011). That made up for some serious disappointment in the Scottish Championship where he won two rounds compared to David Bogie’s four, and just lost out on the McRae Rally when the car failed him on the final stage. It could so easily have been a double championship celebration. 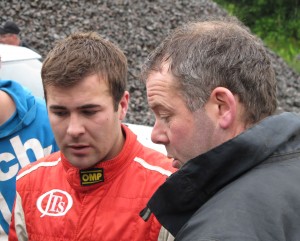 Why rallying?
I suppose it’s the area we’re in with Jim Clark and Andrew Cowan and Louise. My uncle was racing and my Dad was rallying. The area is steeped in rallying, so that must be it.

5. Hero?
Colin McRae. Dad followed him in the early days and I remember watching it come up on Teletext when Colin won the World Championship in ’95.

9. Best result?
The Malcolm Wilson last year (2013). It was against strong competition and we went on to win the BTRDA Championship.

10. Worst result?
Last year on the McRae Stages (2013), breaking down on the last stage when we were leading. That was hard to take.

11. Worst accident?
Isle of Man 2010. We were testing the car and new dampers, and it all ended in tears. Ian Paul was with me but we were both OK after it.

12. Favourite Rally/Stage?
Errochty and Craigvinean are my favourite stages, and Rally of Scotland and Wales Rally GB last year were my favourite events, but probably Rally GB is the best.

13. Food to go?
On rallies I tend not to eat. Don;t have the stomach for it. A bowl of cereal in the morning perhaps then just Lucozade Sport during the day. I don’t drink hot drinks at all.

14. Fitness?
I play football when I’m not rallying in the Border Amateur League – we got beat 4-2 last week! Didn’t do much last year after a knee operation but getting back to full fitness now.

16. Driving Music?
Mix of everything, no favourites. I just hook up the iPad on the car and set it to ‘Shuffle’.

17. Easy Listening?
Don’t get time to chill out with a 15 month old boy and ‘the wife’ – and there’s another one on the way. Child that is!

18. Time off?
Football mainly, but there’s a good crowd down here I socialise with.

19. Reading material?
I’ve got a subscription to ‘Motorsport News’ and ‘PaceNotes’ and read ‘The Scotsman’ every day.

20. Social media?
I don’t even know half the stuff that goes on my own pages, it’s other folk that do my own website, Facebook and Twitter accounts. I’ve got no interest in it, although I do read all the usual rally websites.