There was a BIG surprise at Scottish rallying’s end of season gala awards night in Glasgow when the Jim Clark Reivers Rally was awarded the Chairman’s Cup for best event of the national 2013 Scottish Rally Championship. 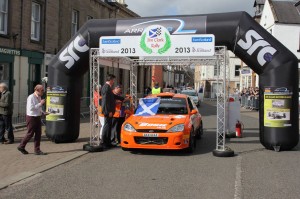 In front of Scottish Rally Champions past and present, and almost 500 guests, the organisers of the Berwickshire based rally had their efforts officially recognised and rewarded.

Stepping up to receive the trophy, which was presented by Britain’s first ever World Rally Champion, Louise Aitken-Walker, was a very surprised, Colin Smith, Clerk of the Course for the Reivers event: “I was gobsmacked, absolutely gobsmacked,” said a delighted Smith, “never in a month of Sundays did I dream of this. I knew we had a run a near-perfect event, but there are so many great events and excellent organising teams in the Scottish Championship, that it’s always difficult to pick a winner.”

As Clerk of the Course for the past six years, Smith added: “It’s a team effort. Over the past few years we have introduced new ideas and new faces in the organising team, so this recognition is a culmination of all their efforts.”

Commenting on the presentation of this award, Scottish Rally Championship Chairman, Dave Robson said: “Whilst all event organisers are under continuous pressure in their volunteer roles, the additional restrictions of a Road Closure Order means that when a closed road rally runs as well as the 2013 Reivers did and is enjoyed by all competitors as a high speed test of bravery and skill, it deserves recognition. The standard of all events in SRC continues to be very high and we are sure the decision on Chairman’s Cup will remain a difficult one.”

Managing an event such as the Reivers Rally is a huge task each year for the amateur team. On this year’s one-day event there were eight Special Stages totalling 58 timed-to-the-second miles of competition incorporated into a 110 mile road route around the highways and byways of Berwickshire. Not only that, the organising team comprised some 300 organisers, officials, marshals and other helpers, and the whole event ran like clockwork.

The Jim Clark Reivers Rally, supported by Scottish Borders Council and EventScotland, was the third round of the national MSA ARR Craib Scottish Rally Championship run in June earlier this year.