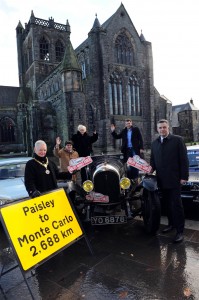 Renfrewshire has pulled off a major coup as it gets set to host one of motorsport’s most iconic and world-renowned events – the Monte Carlo Classic Rally.

Up to 100 classic cars dating back to the 1920s will assemble in Paisley town centre before setting off for the glitz and glamour of the French Riviera.

The event – on the evening of 23 January 2014 – will see Paisley as one of five departure points, alongside Barcelona, Stockholm, Oslo and Reims.

Vehicles driven by classic car lovers will set off from outside Paisley Abbey on the 2,688 km adventure to Monte Carlo, via the Channel Tunnel and over the snow-covered French Alps.

Since the event returned to Scotland in 2011, around over 30,000 spectators have watched internationally-famous cars such as Imps, Triumphs, Porsches and Bentleys set off for France.

This year’s event is expected to see the total economic benefit to Scotland top the £4 million mark since 2011.

The entry list is truly global, with crews from Scotland and the UK joining crews from across Europe. Among those are a Mediterranean mega-yacht captain in a 1958 Riley, a Zurich-based world land-speed record hopeful in a Porsche, and two French crews who will travel to Paisley only to go all the way back again.

Residents had a chance to see some classic cars up close for themselves at a launch event outside Paisley Abbey today (Thursday) – including a 1926 Bentley and a Renfrewshire-made Hillman Imp.

There on the day were Rosemary Smith, Irish rally driver of the 1960s, who will be starting the rally, and Paul Coulter – who wrote the play ‘Linwood No More’ about Linwood’s former Hillman Imp factory and who will be taking part in the rally.

Renfrewshire Council Leader Mark Macmillan said: “We are delighted to welcome this prestigious event and would like to thank the organisers for bringing it here.

“Being chosen to host an occasion of this calibre is a major thumbs-up for the area and the latest boost to Paisley and Renfrewshire’s fast-growing reputation as a venue for top-class events.

“Our events strategy – including this year’s Royal National Mòd and Spree arts festival – is helping to drive the regeneration of the area and boost local businesses.

“We look forward to another big crowd in January and I’m sure the sight of these magnificent vehicles assembling in the town will be a spectacle not to be missed.”

Douglas Anderson, competitor and spokesman for the Rally Start Committee said: “Since we brought the rally start back to Scotland in 2011, it has surpassed all expectations. It is exciting, colourful and endures in peoples’ imaginations.

“Paisley will be an excellent location as a start venue. It has a stunning visual backdrop, with the historic Abbey and Town Hall.

“It also has quick access to the first stages of the route for the cars of all eras that will be taking part. We know it will be a spectacle which befits such a famous event.”

A still-to-be-announced week-long programme of related events will take place around Renfrewshire to mark the occasion – with the area’s links to the car industry through the former Hillman Imp factory at Linwood set to be celebrated.

Paul Coulter, writer and rally competitor, added: “This year is the 50th anniversary of the production of the first Hillman Imp in the area, and 2014 will be 50 years from the first time Imps took part in the rally.

“Paisley was at one time the epicentre of the Scottish car-building industry and it is fantastic to mark this anniversary with the rally starting from the town.”