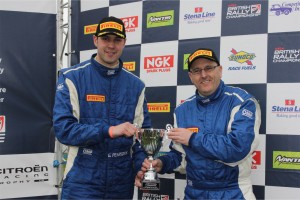 Gary and Tom with some BRC silverware

With two rounds of next year’s British Rally Championship in Scotland, one just over the Border in Carlisle, and another in North Wales which is not too far away, then Scottish crews looking for something different might just be tempted. Quite a few of our lot enjoyed their experiences this year including regulars Garry Pearson, Ruary MacLeod, Gareth White, Ross Hunter and Des Campbell – although John MacCrone didn’t have the best of luck!

Anyway, full information is listed below, so have a look and a think. Yes, entry fees are higher – but so are the mileages and there will be plenty new trees to see and dry stane dykes to sample. And there are some decent prizes and trophies to be had – or to be won!

The main MSA British Rally Championship will continue to be the pinnacle of the sport in the UK and in recognition of this, the cars will run at the front of the qualifying rallies in a modern group. It will again feature just two–wheel drive cars in five new categories, BRC1 to 5 (see below).

Integral to the 2014 Championship will be the new NGK Spark Plugs BRC Challenge Trophy (formerly the BRC Challenge) which will be inter-seeded with the main BRC group, providing all the benefits of participating in the MSA British Rally Championship, but on a smaller budget. The Challenge Trophy runners will complete a shortened version of the overall route and are not allowed to do reconnaissance on gravel.

The 2014 MSA British Rally Championship (BRC) will comprise seven classic rallies, a mix of four gravel and three asphalt events, each offering a different length, terrain and character. New for 2014, the epic Rally Isle of Man will provide two points scoring opportunities creating eight rounds in total, with competitors counting their best six scores. With four rounds on each surface, separate Asphalt and Gravel Championships will exist for all competitors including BRC Challenge Trophy runners.

The introduction of a clear, logical, ladder of progression to support the growth of new competitors and their development through to the highest level in the UK has resulted in a new class structure BRC1 to 5. The outright rally wins and eventual British Rally Champion driver and co-driver are expected to come from BRC1 which is based on FIA R3 regulations, BRC2 will be for FIA R2 and Group N3 category cars and the technical regulations for both will provide for a one-off development of vehicles via the Championship Passport scheme.

For newcomers and those competitors who prefer lower cost, shorter events, the NGK Spark Plugs BRC Challenge Trophy provides a starting point, experience and insight of each event, recce on asphalt rounds, plus reward and recognition with its own dedicated finish ceremonies. The Trophy classes, BRC4 & BRC5 will be open to non homologated vehicles and provide the BRC Stars of the Future (for under 21 year olds) a first rung on the ladder to BRC stardom.

The Championship will shortly be announcing the formation of the BRC Constructors Commission whose purpose is to engage with manufacturers, broaden the appeal of rallying and agree innovative ways of dealing with the complexities of balancing performance from the wide range of modern lower displacement car engines. The BRC is also developing a closer working relationship with MSA British Historic Rally Championship, joining forces to provide spectators with an exciting range of new and classic rally cars to see.

The individual successes of the Pirelli Star Driver competition and the Road to Wales WRGB scheme will be enhanced and continue in 2014. The final details of both initiatives are due for announcement at the Autosport Show at the NEC in January.

The MSA British Rally Championship has just adopted its inaugural official charity, Wings for Life, which focuses on research into spinal cord injury, will receive support throughout 2014.

The full overview document providing information about 2014 can be downloaded here:
http://www.rallybrc.co.uk/docs/forms/2014_BRC_Overview.pdf

The Events
•    BRC events (National A) will be run for modern and historic vehicles, who will welcome non championship registered competitors
•    NEAFP status allowing foreign participation
•    These classic events, a mix of asphalt and gravel will be run for homologated and non homologated two-wheel drive cars
•    The events will be split into two, one modern group will be allowed reconnaissance on gravel and traverse 100% of the route. The other group (modern and historic) will not be allowed gravel reconnaissance and will traverse a shortened route (approx 60%)
•    The whole group will be seeded together, the moderns will lead, followed immediately by Historic Category 1, then a small gap ahead of Cat2, 3 and 4 cars

2014 Calendar  (Best 6 scores from 8 rounds to count)
The calendar provides a geographical spread in England, Scotland, Wales, Northern Ireland and now the Isle of Man, each enjoying high-profile city centre starts and finishes, together with spectator stages that provide media exposure via regional TV news stations, radio, local and national press. This in-turn allows a tactical campaign of promotional activities.

New Categories:
The new categories are designed to provide a logical step in progression for those entering the BRC for the first time. Only two-wheel drive cars registered after 1st January 2001 will be allowed to enter in the following classes (older cars may be permissible with championship agreement):

BRC5 – Standard showroom specification cars up to 1600cc, equivalent to R1 spec, providing low cost entry level with limited and closely monitored technical modifications. BRC Stars of the Future U21’s will need these cars.
BRC4 – Modified homologated and non homologated cars up to 2000cc. Sequential gearboxes only allowed up to 1600cc. Showroom shell profile only, wide track only on application.
BRC3 – Are BRC5 category cars allowing LSD and handbrake upgrades. MSA British Junior Rally Championship U24’s will require these cars.
BRC2 – FIA homologated or championship passport Rally 2 category, Group A two-wheel drive cars up to and including 1600cc and Group N cars up to 2000cc.
BRC1 – FIA homologated or championship passport Rally 3 category, Diesel, Super 1600 and Group A cars (non kit) above 1601cc up to and including 2000cc.

The Prizes*
The popular Pirelli Star Driver competition has changed to provide the winners of each Championship a place in the final assessment which is currently under review. This means that the British, RallyTwo and Junior champions will all be given a place. They will be joined by winners of the NGK Spark Plugs BRC Challenge and BRC Stars of the Future Champion providing they have used Pirelli tyres throughout the season. The Championship will retain the ability to select two further wild card entries if pertinent. The new look competition and prize(s) will be announced at the Autosport Show in January.

BRC Stars of the Future – 2015 registration to the Championship, £300 per event entry fee in 2015 and free entry to 2014 Wales Rally GB National – worth approx £4000 (plus Pirelli Star Driver opportunity)

Road to Wales – entry to Wales Rally GB will continue for 2014 for the top three crews overall, the RallyTwo Champion and the British Junior Champion. Entry to 2014 Wales Rally GB National for the BRC Challenge Trophy champion and winner of the BRC Stars of the Future. It is hoped that the scheme will be enhanced with other initiatives. An announcement is expected at the Autosport Show at the NEC in January.

Fees – Incentivised and tiered fees are offered for classes, providing some of the best value rallying per stage-mile in the UK