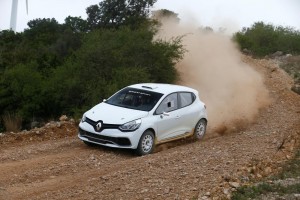 Testing is already well under way

With Citroen and Ford dominating the R3 class in rallying, it looks as though Renault will be aiming to give them a run for their money next year with the announcement of a new Clio. Although popular in the French championships and many other European competitions, the Clio hasn’t enjoyed the same sort of success over here, so maybe the new car will change attitudes.

Renault Sport Technologies unveiled its new turbo engined Clio Renaultsport R3T at the Rallye du Var in France last weekend. This was the last round of the highly successful Renaultsport Rally Trophy season and gave competitors a chance to get up close and personal.

The original 2006 Clio Renaultsport R3 made an indelible mark on Renaultsport’s involvement in rallying. It offered performance comparable to the Super 1600 at half the cost, with the car scoring hundreds of wins and dozens of titles across the world. In fact Renaultsport sold 373 kits for its first R3 model built to comply with the FIA R3 regulations.

“With the Clio Renaultsport R3T, our aim has been to come up with a high-performance, reliable vehicle adaptable to every type of surface, all for an operating cost below that of the product it replaces,” said Renault Sport Technologies Motorsports Director Arnaud Boulanger. “The success enjoyed by the first generation of Clio Renaultsport R3s has bolstered our belief that this formula is especially well suited to meet the requirements of our customers. This class has given Renaultsport the opportunity to find its feet and to excel in a number of markets, several of them outside Europe, with our cars now present in Asia and the Pacific, Latin America and Oceania.”

He added: “Initial tests have been promising and a lengthy development campaign has been scheduled in the lead-up to the kit’s approval. Put through its paces by several drivers, the Clio Renaultsport R3T will be tested for more than ten weeks on dirt and tarmac with a view to identifying the best options.”

The car is expected to receive approval early in the second half of 2014.