It may only be November, but the organisers of the RSAC Scottish Rally are already planning ahead for their event on Friday 27 and Saturday 28 June 2014. 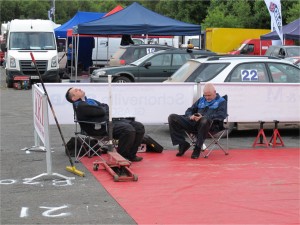 This year’s event was very tiring!

The use of stages nearer to the rally base in Dumfries will allow a more compact rally route and also an earlier finish, which should be welcomed by competitors. It will also allow more spectators to see the finish.

“A mix of modern and historic cars should create a mouth-watering spectacle for spectators. Being a round of the MSA British Rally Championship provides national and worldwide appeal, and the event provides huge economic value and promotion for the local tourist industry.”

“I am looking forward to working closely with the event organising team and Dumfries and Galloway Council in ensuring we increase the profile of the rally and extract the best value from our association.”

John Hunt, Secretary of the BHRC, said: “The organisers of the MSA British Historic Rally Championship are pleased to have the RSAC Scottish Rally as a round of the 2014 Championship. The opportunity to compete on the classic stages of Eskdalemuir and Ae Forests has been enthusiastically received by our competitors and we are looking forward to our journey north to Dumfries.”

The National B event will start from the High Street in Dumfries early on Saturday morning and crews will run first on the road through stages in the Ae complex. They will then head east to Eskdalemuir where the forests will provide a grandstand finish with everything to play for over the last fifteen miles.

Dave Robson, Chairman of the ARR Craib MSA Scottish Rally Championship, said: “With the event retaining a similar format to this year, our competitors will enjoy an early run through the testing Forest of Ae complex before heading to stages which will have been unused for 2 years giving an excellent chance to compare times with crews from the BRC.”

“We look forward once again to ‘mixing it’ with those teams, at the start, in the service area and on the stages.”

Detailed routes will be published once negotiations are finalised with the Forestry Commission. 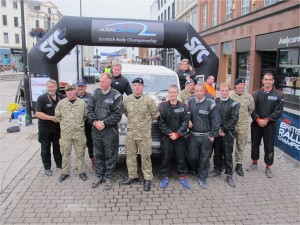 Jonathan Lord, Clerk of the Course, said: “We have worked hard with the management of all our Championships to reach a solution which will be fair to all parties. We learned a great deal from our first year back in the BRC in 2013, and we are delighted that in 2014 we will also be a round of the MSA British Historic Rally Championship.”

“We are planning a more compact route for 2014 which should be welcomed by competitors, and I am particularly pleased that Castle O’er and Twiglees should feature again after a year’s rest.”

The rally is sponsored for the eighteenth consecutive year by Dumfries and Galloway Council. This is thought to be a record for a partnership between a rally and a British local authority.

Councillor Colin Smyth, the Council’s Events Champion said: “Dumfries and Galloway produces its fair share of rallying champions, and the Scottish Rally is a great showcase of edge of your seat, adrenalin fuelled competition for our local stars to participate in.”

“I’m delighted that the 2014 Rally will again form part of the British and Scottish Rally Championships, and that there are good opportunities for spectators to enjoy more accessible access to the wonderful action.”