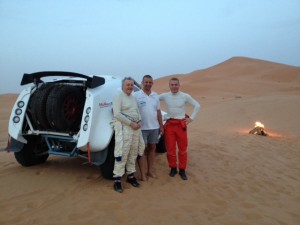 Jim and Sir Chris with Chris Leyds of McRae Enduro Sport in the Moroccan desert.

Britain and Scotland’s most successful Olympian, Sir Chris Hoy is coming to Aberfeldy next month to participate in the Colin McRae Forest Stages Rally, the penultimate round of the ARR Craib Scottish Rally Championship, on Saturday 5th October.

A known petroholic, Sir Chris Hoy hosted the recent BBC Television tribute to the late Colin McRae which was part of the company’s ‘Racing Legends’ series.

Each year, the Lanarkshire based Coltness Car Club host a round of the national Scottish Rally Championship in their former club member’s name, the Colin McRae Forest Stages Rally.

In the past, Sir Chris’ sporting cycling commitments have precluded any involvement in motor sport but since retiring from the sport he has been able to devote more time to other passions.

Since his ‘retirement’ Sir Chris has participated in both saloon car and sports car racing events at circuits including Brands Hatch and Oulton Park. When approached by the BBC with regard to the ‘Racing Legends’ series he achieved a personal ambition, to drive a rally car. And not just any car, Sir Chris drove Colin McRae’s World Rally title winning Subaru Impreza.

During filming for the series, Sir Chris spent a lot of time with Colin’s father Jim McRae: “I didn’t realise just how big a fan Sir Chris was,” said Jim at his Lanark home, “but he obviously followed Colin’s career in great detail and knew a lot about rallying.”

When Jim then asked if Sir Chris would like to ‘co-drive’ the Course Car on this year’s Scottish Championship event, he jumped at the chance. The event will give him an opportunity to experience rallying at a national level, but he will have a serious job to do on the day.

Jim explained: “Course Car duties at any event are vitally important. The crew has to run ahead of the competition checking out the Stages, the directions, the timing, ensuring the Marshals are in the right place and making that final decision before the serious competition gets underway.”

“We’ll both have to keep our wits about us over the weekend,” said Jim, “and it will give Sir Chris another insight into our sport. He’s looking forward to it.”