Dave Weston Snr made a surprise decision immediately after the test day, before Saturday’s McDonald & Munro Speyside Stages Rally, and duly registered for the ARR Craib Scottish Rally Championship later that evening. He did four runs in the Paul Benn prepared Ford Focus WRC02 on the Friday and said: “I just feel so comfortable in that car. I’ve driven both that and a WRC Impreza, and although the Subaru might be a bit faster, the Ford just suits me right down to the ground.” Although he finished fifth on the rally, the 2006 Scottish Champion was pretty upbeat afterwards: “I’m obviously still rusty, and we did have a problem with the front diff on the car, but I’m really looking forward to the Merrick, McRae and Galloway Hills.”

For dedication to his sport, Mark McCulloch’s 18 year old English co-driver Elliott Edmondson has few equals. When he finished work on Friday in Milton Keynes (that’s near London, the capital of Englandshire), the youngster jumped in his SEAT Ibiza and headed north on the 8 hour trip to Elgin where he managed to snatch a couple of hours sleep, before taking part in Saturday’s Speyside Stages Rally. He was co-driving for Mark in his Subaru Impreza on this fifth round of the Scottish Championship. The duo finished 16th overall and might well have scored a top ten finish had it not been for a puncture on the third stage and a broken driveshaft on the sixth. Immediately after the rally, Elliott jumped back in his car for the 532 mile trip back to Milton Keynes ready to start work on Sunday morning. Although still at college Elliott is holding down a job in a supermarket to help pay for his studies, and his sport! Crikey, I can remember when I was that keen, just!

It was lovely to see Heather (wife and mother) MacKenzie at the Speyside test day and she actually had a run out with the Hebridean Hurricane, just for old time’s sake. “I couldn’t do it any more,” she said afterwards, “I was way ahead on the Notes all the time. Calum asked why I was so far ahead on the Notes and I told him that perhaps it was because I wanted it over quicker – or maybe it was just that he couldn’t keep up!”

Keith Robathan was helping Calum MacKenzie at the Speyside, but is still sore from his severial bump on the Jim Clark Rally. “There’s nothing broken,” said Keith, “but I’ve got pelvic whiplash. It was all soft tissue damage. It’s improving slowly.” As for the car, it’s already been broken and sold, but Keith is still puzzled as to exactly what happened. “I’ve been through that stage (Swinton) lots of times in the past, in the wet and the dry, no problem. I still don’t understand it. If it had been me or something broke I could accept that, but it wasn’t. The car just swapped ends through the farm yard.” Undaunted, Keith has a plan. “I’ve still got the old car I bent on the McRae. It’s been re-shelled and I’ve got a John Reid engine for it!”

More good news from the Jim Clark, Dale Robertson has replaced the Evo9 which got burned out in that horrific incident in Ayton. He’s bought another Evo9 having sourced it across the water in Ireland.

Alex Pirie got himself a passenger in the 1300cc Toyota Yaris at the test day, one David Bogie Esq. “I’m really pleased,” said Alex, “he’s just a regular bloke. There was just one bit where he said I could have gone a bit quicker and carried more speed, but he was quite impressed the Yaris. He reckoned it couldn’t have gone much quicker through the stage. I was really quite pleased with that.”

Seeing the light? Ian Paterson is the latest to switch to pump fuel instead of ‘racing fuel’. “On the rolling road it says 12 bhp less,” said Ian, “In a car that’s got nearly 300 bhp I can live with that.”

Kevin Rae will make some woman a good ‘wife’ – he had the sewing kit out at the Speyside to sew his Pirelli badge back on to his ovies when the thread starting coming loose. Don’t tell Louise!

The eedjits were at it again on the Speyside. Scott Peacock and Keith Riddick were playing ‘Horse’ again when they should have been rallying. “I won this time,” beamed Scott, “but we only saw one horse in a field and it was on my side!” Had they been paying more attention to the sport of rallying, then who knows, they might have done better than 45th o/a and 6th in class. Seriously, they did well. They lost the brakes half way through Stage 8 but before that the poor wee Peugeot gave itself such a bang on a rock in a stage that they thought the petrol tank had fallen out.

Looking ahead, the GWF Energy Merrick Rally (7 Sept.) has found a ‘new’ stage. According to Alan Marshall: “It’s not exactly new, but it was last used in 1976!”

As we all know, the Armstrong Galloway Hills (27th oct.) has been included in this year’s ARR Craib Scottish Championship and that ever enthusiastic bunch down there have been plotting. The rally will have its very own ‘spectator special’. Jock Armstrong has been building a super-special type stage in a local quarry and according the locals it will have ‘an over and under’ in the nearly 2 mile long test. T make best use of the terrain, they needed a bridge to make the stage loop back, but where do you buy a 30 ft bridge off the shelf? Somebody suggested phoning Dave Weston – do you happen to have a 30 foot bridge in stock? Back came the answer – oddly enough I might have, we got one in to scrap, I’ll just go and look. A few minutes later he called back and said they were in luck, they hadn’t started cutting it up yet. One problem solved, now for the next one- how do you get a 30 foot bridge from Aberdeen to Castle Douglas? 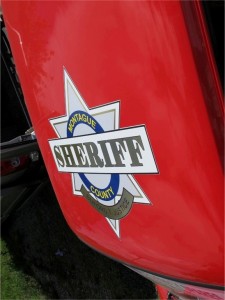 According to Barry Groundwater, anyone who listens to ‘the Sheriff’ must bear two things in mind – 75% of what he tells you is lies, the other 25% is bullshit. And I used to think they were friends.

Sheriff MkII. Looks like there’s some competition for Brian Watson. Matthew Robinson has a huge American Sheriff’s badge painted on the roof of his Escort. He thoroughly enjoyed his first visit to the Speyside: “It’s the furthest north I’ve ever been,” he said, “previously the McRae was the furthest north. It was so high up I got DVT, but I put my stockings on for Speyside!” As for the Sheriff’s badge that was easily explained: “I’m always chasing Steve Banner,” he said, “Steve’s a hero of mine, so I’m the Sheriff and he’s the Bannerdit!” Get it? Oh, please yourself.