Highlight of the year … Like any other job, working as a motoring journalist has its highs and lows. Most of my friends think it’s glamorous. Perhaps it was – once! Not any more.

These days motoring journalists can often spend more time in airports than in the cars they will be driving at the destination. That’s because motor manufacturers have discovered that it’s much cheaper to stage a launch at one venue in one country and then fly all the motoring journalists from around Europe (and further afield) into and out of the host location like some package holiday deal, but without the holiday.

A typical new-car launch might entail an early morning flight from Glasgow or Edinburgh to Heathrow or Gatwick to meet up with English colleagues and travel as a group. Once the formalities of queuing, frisking and scanning are complete then it’s into the lounge to await the onward flight to be called. And that’s if there is no delay.

On arrival at the venue, there are usually a fleet of press cars nearby which are then driven over a pre-arranged route to the overnight hotel where a presentation precedes the food. Another early morning start the next day will have the group driving back to the airport for the return flights, often arriving back in Glasgow or Edinburgh on the last flight out of London – if it hasn’t been cancelled!

It’s no wonder that some of the ‘old hands’ will happily forego foreign new-car launches and wait for the domestic UK launch of the same vehicle prior to it being offered for sale in the domestic market. OK, they might miss out on the ‘early scoop’ but on the other hand, writing about a car just ahead of its local market launch is no bad thing, is it?

Having said all that, the ‘home’ launches are often held down south which requires a flight there and back in a day, or if not too far off, a drive down and back.

Occasionally the UK launches are held in Scotland. In fact our wee nation has actually hosted some world launches of brand new cars and vehicles, but these are few and far between. We have the hotels, the food and the roads, so why not?

Anyway, one of the highlights of recent years involved the recent launch of the new Range Rover Sport ‘Petrol Hybrid Electric Vehicle’. The Scottish contingent met up in the romantic surroundings of the Euroterminal railhead and logistics base at Mossend in Lanarkshire to drive Land Rover’s first hybrid.

The route was already pre-programmed into the SatNav so after pairing up with the least scary fellow colleague driver (and that’s another story, or two!) we headed off, following the route – to Rosyth Dockyard.

Our destination was the on-shore, dockside office where the Royal Navy has a team working alongside the specialist teams who are building one of the largest ships ever constructed in the UK, HMS Prince of Wales – and we got a tour, ahead of its official handover to the Navy next year. 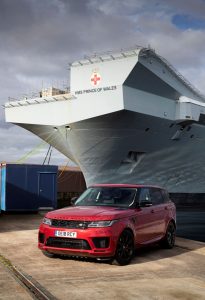 The huge shape dwarfs everything around it as it looms large on the horizon on the approach from the M90. From keel to mast tip, the ship measures some 73 metres (240 feet) in height, that’s taller than Edinburgh’s Scott Monument and more than twice the height of the Kelpies which are a ‘mere’ 30 mtrs high.

Then it’s on with the safety boots, hard hat and Hi-Viz waistcoat, ready for the unseemly sprachle up and down the ‘ladders’ (they are far too steep to be called stairs) that connect all the various decks on this massive ship.

However, everything is massive on this ship. For instance, the main flight deck is the size of three football pitches. Mind you that sounds big until you think that a pilot will have to land his 1,200 mph Lightning F-35B jet on the bluidy thing – while it’s moving, and at speeds up to 25 knots (28 mph)! Underneath the flight deck there are three inter-linked hangers capable of housing 36 aircraft and 4 helicopters with two huge lifts which can transport four fighters up to the flight deck from the hangar in under 60 seconds.

When the ship is fully operational, the 65,000 tonne vessel will provide home to up to 1600 service personnel with room for another 600 should they need to carry troops. To look after that lot, the ship also has its own bakery, dentist, pharmacy, surgery and operating theatre.

But it was on the Captain’s Bridge, where I got my hands on the wheel (although it wasn’t connected to engines or rudders) that one of the most impressive statistics hit me. It kind of puts the concept of autonomous self-driving cars into perspective when the young naval seaman explained that the on-board Artisan radar system can track a tennis ball travelling at three times the speed of sound, while the Long Range Radar system can track up to 1,000 contacts in the air or on the sea in a 250 mile radius of the ship. Despite its low ceiling the Ops Room is huge with large desks and more monitors than a big branch of PC World. Kind of puts the safety of driverless cars into perspective, eh?

After the tour it was into the Canteen for a bite to eat and try to digest the mind boggling barrage of statistics that the proud naval crew members were extolling. And here’s another, the wiper blades on the Bridge windows are 2.4 mtrs long. Wonder if the local Halfords carry them in stock?

So what’s all this got to do with Land Rover? They actually have one on board the ship. It’s for senior members of the crew to drive on ground based duties. And another thing, the HMS Queen Elizabeth which is already on sea going exerises carries a Jaguar F-Type on board which senior crew members use on their visits to foreign ports. It’s all just part of JLR’s contribution to our service men and women. Naturally, it’s a good advert for JLR too. 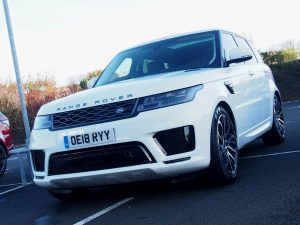 All too soon it was back aboard the test cars, the real reason we were there, for the drive back a different route to the wonderfully ‘scenic’ North Lanarkshire.

Whereas the ship has four Wärtsilä diesel generators, each capable of producing more than 11 Megawatts of power, and two Rolls-Royce MT30 marine gas turbine engines, the Range Rover has ‘only’ got a 300hp 4 cylinder Ingenium petrol engine and an 85kW electric motor with a 13.1kWh lithium-ion battery. That’s still good for 404hp. Range Rover claim some exceptional fuel economy figures for the car, but it would require a longer test in everyday conditions to coem up with a more realistic, everyday average.

Other than that, there is little more to be said. It looks like a Range, Rover, drives like a Range Rover and it has Range Rover badges all around it, so it must be a Range Rover. In other words, it drives as smoothly as you’d expect, on or off road, and the shifts between electric, petrol or combined drive modes are quite simply seamless. It’s also quite rapid.

What a car, but boy oh boy, what a ship. As the Americans say all too often, it is quite ‘awesome’ but in this case, fully deserving of the true meaning of the word.